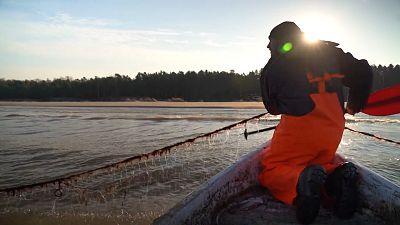 The Baltic Sea is the youngest on the planet. It's a sensitive ecosystem where the affects of climate change here can often be seen faster than other parts of the planet.

Ervins Vilcins has been a fisherman in the Baltic for over 35 years. He’s seen for himself the affect warming waters are having - and it’s not just the size of the catch.

Nature is changing fast. I am not even talking about small microorganisms, which we cannot see.

“Harsh winters are very seldom. The water is very likely getting warmer. The fish are becoming more various, for example, a round goby has come into our fauna, which has not been here before. With ballast water different kinds of crabs are introduced. Nature is changing fast. I am not even talking about small microorganisms, which we cannot see,” he says.

Salmon and cod were once abundant in the Baltic sea. Now they are increasingly rare. They are in peril not only because of excessive overfishing but also because there are fewer and fewer spawning grounds. Scientists say parts of the Baltic Sea have already become dead zones, as the amount of oxygen is not sufficient to support living organisms.

That is because the rate of water flowing into the Baltic's semi-enclosed eco-system is declining.

“Those large-scale water inflows were quite regular in the last century but now in the last few decades they’ve disappeared and there are only a few large water inflows. Basically, with those water inflows more saline, more oxygenated water from the North Sea flows into the Baltic Sea and it enables the Baltic sea environment to breathe. And it’s one of the reasons why the Baltic is in such bad shape nowadays,” explains Ivars Putnis, a researcher at the "BIOR Scientific Institute.

It’s a bit frightening because right now I don’t see ways in which people are really looking at how to preserve it seriously.

But it’s not just global warming. The Baltic Sea is facing other environmental threats. Pollution from industry and farming are also taking their toll. It’s the reason why the Baltic is recognised as one of the world's most polluted ecosystems.

“It’s a bit frightening because right now I don’t see ways in which people are really looking at how to preserve it seriously. It’s more about – let’s find new ways on how to get some economic benefit,” says Juris Aigars, a Senior Researcher at the Latvian Institute of Aquatic Ecology.

Reporting from the Baltic for Euronews, Janis Laizans says: “Some may say that global warming will eventually make the Baltic Sea like the Mediterranean, but in reality, it may transform it into more of a Baltic Lake, than a sea."