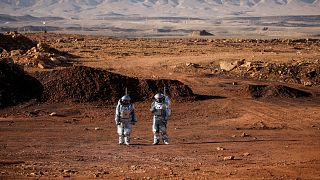 The Ramon Crater in Israel’s Negev desert has been transformed into a Martian base camp. Giving scientists and astronauts the chance to experience what life might be like when humans venture to the red planet.

During the one-month-long mission, six astronauts will sleep, eat and conduct experiments at the Desert Mars Analog Ramon Station (D-MARS). Experiments will serve as a simulation for future human and robotic Mars exploration missions.

When required to venture outside, the astronauts wear mock space suits fitted with cameras, microphones and self-contained breathing systems for data collection.

During the one-month-long mission, six astronauts will sleep, eat and conduct experiments at the Desert Mars Analog Ramon Station (D-MARS),

D-MARS is located in the Negev desert in southern Israel, which is an extremely arid environment. This makes it the perfect location to simulate life on Mars, as the region typically experiences no rainfall from June to October.

To simulate the challenges of a real base camp on Mars, D-MARS runs completely off-grid, harnessing wind and solar energy. This green energy also powers the rovers and drones used by the astronauts in their experiments.

Space travel has long been responsible for new and important inventions. From the all-important NASA space pen to cochlear implants, scientists are hopeful that solutions to long-term space travel could help make our own planet a greener one.

Multiple missions have taken place at the Ramon Crater since D-MARS was built in 2018. However, this current mission is possibly the most ambitious.

Staffed by six astronauts from Austria, Germany, Israel, the Netherlands, Portugal and Spain, the mission will run until the end of October, and sees the Austrian Space Forum working in cooperation with the Israel Space Agency.

This new tech could bolster Europe’s force of firefighting aircraft