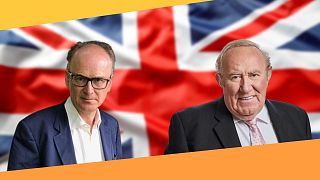 New UK broadcaster GB News has been criticised by environmentalists for giving a platform to climate change sceptics.

The channel launched two weeks ago as the first British news channel to explicitly have a political angle.

Over the past fortnight, GB News has been beset with technical difficulties and mischievous pranksters making their way on air. However, some critics have called out the channel for some of its guest selections.

GB News has broadcast some segments showcasing a more positive take on environmental issues, like a piece looking at support for electric cars in Britain or another which looked at what more G7 leaders need to do to tackle the climate emergency.

But some people have labelled the channel "actively dangerous" for its decision to "debate facts" about the environment.

The channel has interviewed two people so far who are associated with the Global Warming Policy Foundation (GWPF), a lobbying group that promotes climate scepticism.

Matt Ridley, a viscount and member of the House of Lords, appeared on the channel to discuss carbon emissions as an adviser to the GWPF. Ridley is a strong proponent of fracking and owns land in England’s North East where Shotton Surface coal mine is operated - for which he is paid.

Ridley used the platform to claim the UK's high levels of carbon dioxide emissions are “greening” the earth, which is “a common trope that is often used to play down the seriousness of climate change,” notes Rich Collett-White, deputy editor of DeSmog in an article analysing the channel’s environmental coverage.

“Montford [spoke] about the allegedly growing risk of power outages in the shift to net-zero emissions, only to be met with a black screen, as Montford’s own connection appeared to fail,” writes Collett-White, “you really couldn’t make it up.”

Why are advertisers withdrawing from GB News?

One of the biggest blows to the channel so far has been the number of companies who have withdrawn their advertising, with many sharing their concerns over GB News’s content on social media.

The commercial exodus has been led in no small part by Stop Funding Hate, a campaign founded and led by Richard Wilson to encourage companies to divest from platforms and publishers which encourage divisive rhetoric.

As well as the brand listed above, Wilson notes that "many others appear to have dropped GB News quietly without making any public announcement."

While Stop Funding Hate is primarily concerned with content that promotes "fear and division", Wilson also explains that climate misinformation is increasingly on companies' radars when it comes to advertising.

"As more and more big companies make strong public statements about their commitment to tackling climate change, it seems inevitable that pressure will grow for brands to ensure that their ad money is not funding media that deny or downplay this problem," he explains.

"Stop Funding Hate’s core focus is on hateful and discriminatory media content. But we are also concerned about misinformation more broadly. Given what’s at stake, it’s difficult to think of a more damaging form of misinformation than climate change denial.

"Advertisers are becoming increasingly mindful of this issue, as the progress of our sister campaign #StopFundingHeat has helped to show," Wilson concludes.

However, the channel isn’t solely funded by commercials. It also has several high profile investors - mostly from outside the United Kingdom - providing millions in financial backing.

Among these backers is the Dubai-based investment group Legatum. Legatum’s founder, the New Zealand-born Christopher Chandler, also helped create and still funds the Legatum Institute, a London-based think-tank with some controversial connections.

According to an investigation by Byline Times, the Legatum Institute “has direct ties to the Koch network” including “the Koch-funded climate science denial group, the Heartland Group.”

A recent report by Greenpeace found that the Koch Family Foundations spent upwards of €120 million between 1997-2018 financing projects, causes and groups which attack climate science.

Why are environmentalists concerned about the channel?

While GB News brands itself as a platform for encouraging “opinion and debate”, critics say that presenting climate science as something open for debate is potentially problematic.

“It is actively dangerous for them to be platforming climate change deniers,” says environmental scientist Sara Thomson.

There are political points where it is important to show both sides of the conversation and present alternative perspectives - but when it comes to climate change, quite often the ‘other side’ is often just conspiracy theories.

“I have views that differ from other people over things like taxation, for example, and I think it’s great to have a balanced debate on that,” explains Thomson, “but climate change is science. You can’t debate facts with financially motivated fiction.”

"Any claim that the scientific consensus surrounding human-caused climate change is 'up for debate' is nothing more than overt disinformation intended to muddy the waters," says Richards.

"For decades, by sowing confusion surrounding climate science, those with financial interests in maintaining the fossil-fuelled status quo have been able to delay the implementation of effective climate policies.

"There are not two sides to an issue that 97 per cent of climate scientists agree on. The existence of climate change is not a partisan issue that is to be argued about on talk shows," she adds.

Richards explains that there are still legitimate conversations and debates to be had around the climate crisis, but simply not about whether or not climate change exists.

"At this point, any debate regarding the existence of climate change is intentionally trying to distract from legitimate and important conversations about how to combat it," Richards concludes.

Anti-science articles dismissing the realities of climate change have been a problem for a while now, particularly with the rise of social media, but platforms like Facebook have begun to label this type of content as untrue.

Matt Hope of DeSmog argues that GB News could be an opportunity to show that climate change is not a partisan issue. However, instead "GB News’s position is completely out of step with contemporary media coverage on climate change," Hope writes in the Independent.

"Until the channel recognises this, it will be stuck on the fringes, where its climate science-denying guests remain."