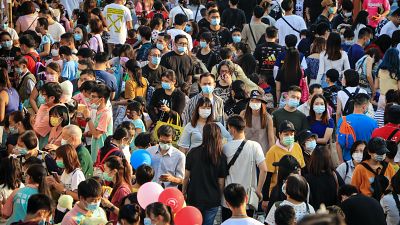 'Collectivist' nations in the Asian continent have fared much better in the face of a pandemic   -   Copyright  Macau Photo Agency via Unsplash
By Shannon McDonagh  •  Updated: 02/02/2021

The pandemic may have had little impact on the course of climate change, but COVID-19 can definitely teach nations a lot about impending global threats.

Researchers at King’s College London have concluded that countries better prepared for the climate emergency have been much more equipped to handle the coronavirus pandemic.

Crucially, the team found it would serve countries better to treat the climate crisis as if it were an epidemic.

The study took data from 110 countries and found that societies “in which individuals look after each other” place a higher priority on sustainability, making them better suited to fighting the pandemic.

“The research highlights the crucial need for investment in both climate action and public health infrastructure,” says a spokesperson from King’s College London, “so countries can be better prepared for similar disasters in future.”

The team found it would serve countries better to treat the climate crisis as if it were an epidemic.

Other experts in the field concur with the results of this research too. “The findings of this study are very interesting, the result makes a lot of sense,” says Andrew Challinor, Professor of Climate Impacts at the University of Leeds.

“Work assessing evidence of climate risk for the UK indicates that resilience comes from coordination and cooperation across society.”

How do the two connect?

Collectivist societies, that is countries or communities that prioritise groups over individuals, are seeing the light at the end of the pandemic tunnel. These nations are by extension more likely to be prepared in the event of a climate emergency, due to placing a higher degree of trust in improving society overall.

By looking at the social, economic and health based responses each country offered when the virus hit, researchers at King’s College have found that the lack of “social cohesion” across the US and Western Europe has driven the death rate higher.

The paper says that though the crisis is far from over, there is enough information out there to support the idea that the more individualistic the society, the higher the pandemic mortality rate.

Along with lack of climate prep, individualistic societies are also less engaged with social distancing and other measures, according to the research.

The origins of COVID-19 remain a puzzle for now, with World Health Organisation officials currently situated in Wuhan to investigate how it came to be.

It’s not yet clear whether the virus began with transmission from humans to bats, but a study from the BMJ does stress the possibility of increased virus transmission because of warming climates.

“Climate change is known to drive wild-life closer to people, which in turn, paves the way for viruses that are harmless in wild animals to be transmitted to humans with deadly consequences,” explains Gulcin Ozkan, lead researcher for the King’s College London paper.

“In addition, the role of both extreme hot and cold weather in increasing mortality and of warmer climates in spreading diseases have been widely recognised.

“It’s time more countries take the climate emergency seriously and governments should invest in the infrastructure that could have prevented further deaths.”