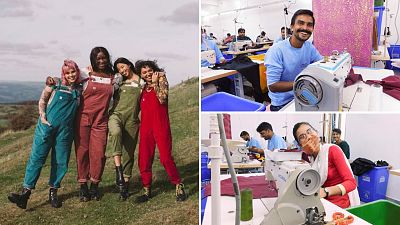 “We weren’t trying to start an ‘ethical, sustainable brand’, we were just being decent humans. We wanted to know these people were being paid right.”

Lucy Greenwood is the co-founder of dungaree brand, Lucy & Yak, which has seen incredible success over the last two years gaining a cult following on social media.

So why are the brand’s dungarees so popular? It’s as simple as this - customers know the people making their clothes, their names, what they look like and where they are. Lucy & Yak is one of those rare brands that puts their garment workers at the forefront of their marketing, appreciating them as a key, respected part of the supply chain.

Lucy speaks to me from her sunflower filled garden in Barnsley, with a striking sense of honesty for the founder of such a popular brand. “I wouldn't even say we were massively into sustainability before we started Lucy & Yak. For a long time we’ve always been quite minimal people, I’ve never bought a lot of clothing.

“Before we knew it, we’d hit all the trending buzzwords - by accident.”

It all started when Lucy and her partner Chris decided to pack up their lives, quit their jobs and move to New Zealand. At that point, they had no idea how rapidly their lives would change. Backpacking from hostel to hostel, the pair started collecting old t-shirts from lost and found, and using the fabric to make small tobacco pouches. They sold them to travellers along the way - “they were popular because everyone in New Zealand smokes!” Lucy laughs.

After returning to the UK, the couple began selling vintage clothes on apps like Depop, and it wasn’t long before they spotted a gap in the market. A brand solely devoted to good quality, colourful dungarees.

“Neither of us felt we had an eye for fashion prior, but when you work with vintage clothes, you get an idea of what people like. We realised dungarees were becoming a big thing. Whenever we got a pair of old school Tommy Hilfiger dungarees, we could sell them for £100 - when we bought them for a fiver in a charity shop. Dungarees were like our bread and butter.”

With a style and shape in mind, they planned to move to India to see if they could source some fabrics. Crucially though, neither set out to start an ethical or sustainable brand. It just seemed natural to them both - why wouldn't they get to know their tailors? Why wouldn't they set high standards for health and safety and pay everyone fairly?

“We were just being decent humans,” as Lucy says.

Lucy and Chris met Ismail almost as soon as they arrived, who would go on to single-handedly run their factory in India. At the time, Ismail’s tailors were sewing garments for the local markets, where leggings were sold for less than a pound. “So, you can imagine how much they were getting paid,” she adds.

As the relationship developed, the couple would go out to India frequently, spend time with their tailors and even have parties with them. All the while, they were making dungarees out of end-of-roll fabric leftover from high street brands, which would end up on market stalls in India.

As much as they hate the buzzwords, there’s no denying that Lucy and Chris run a business with ethics and sustainability at its core.

They pay their tailors four times the state minimum wage in India and invest in their factories to ensure they’re clean, air conditioned and operate on solar energy. The team only works with certified fabrics and all product packaging is either biodegradable, reusable or recycled.

Despite all this, Lucy is transparent about how difficult she’s found the formulation of a marketing strategy. It has been difficult to balance showing off what they are doing with wanting to remain candid to customers at all times.

“I remember my cousin who works in marketing said, ‘Lucy, you’ve got an ethical brand, will you tell somebody?!’ Because we weren’t marketing it in that way at all. We were just selling dungarees and telling a bit of a story.”

Yes we’ve got some sustainable fabrics, but anyone who is producing anything new isn’t fully sustainable. I hate using words if we’re not 100% that thing.

Lucy & Yak is now advertised as making ‘Independent, handmade, sustainable dungarees’. This may be true, but the team are honest about the work they still have to do, never claiming to be perfect.

“I’m like, ‘will you stop using the word sustainable?’,” Lucy tells me. “Yes we’ve got some sustainable fabrics, but anyone who is producing anything new isn’t fully sustainable. I hate using words if we’re not 100% that thing.”

We agree on the fact that definitions of sustainability can vary - it’s not enough to just use the word without explaining what you mean.

“There's a lot of high street brands now, they're doing organic, they're doing recycled, that's great. But that is the easiest one to fix, to go from conventional cotton to organic cotton, it just means you've got to pay a little bit more,” says Lucy.

“To actually fix the supply chain problems with workers and slavery and child labour - that's where the real work comes in.”

With so much focus on sustainability, we discuss how it's the people who are conveniently forgotten and who don’t form part of a brand’s story. It becomes a toss-up between sustainability vs ethics, but they shouldn’t be pitted against each other.

Lucy goes on to say how often she gets messages from customers, telling her that they love getting to know the tailors and seamstresses via photos and updates on Instagram. It’s not just in India either, Lucy & Yak have factories in Turkey and the UK.

“We pay people a living wage here in the UK, after what came out recently with the Leicester garment factories that’s so important.”

I wrap up the chat by asking her if she has any advice for anyone wanting to start up their own eco-friendly brand.

“Fashion is intimidating - I get it. Especially when you add ethical and sustainable to the pot. As a business owner, it means always having to go the long way round when it comes to every little decision.”

“Ultimately though, we’re living in a time where the high street is dying and online is booming. It’s much easier to stock an online store than it is to fill a physical shop, so starting off a small brand is much easier than you think.”

But if you’re not willing to put the time in, go the extra mile, make sure standards are high, ensure workers are taken care of and sustainability goals are reached, says Lucy, “don’t bother!”