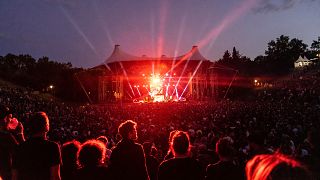 Glaciers are melting, sea levels rising and greenhouse gas levels are now higher than at any time in the last 800,000 years. The science is clear, but where is the creativity dormant within us? With the planet in a sorry state, the least we can do is use our imaginations. For charity Julie’s Bicycle, harnessing the power of the creative arts is one way we can help avert the climate crisis.

Thinking outside the box comes naturally to the arts sector, making it well placed as an industry to come up with solutions. Julie’s Bicycle places music, theatre and performance at the forefront of the environmental conversation, encouraging what is known as creative climate action.

What is Julie’s Bicycle?

Contrary to what the name might suggest, the charity has nothing to do with bicycles, or even anyone called Julie. Simply a catchy name borne out of a trip to London Restaurant, Julie’s, in 2006, this is an organisation devoted to bridging the gap between sustainability and the arts. From solar-powered music festivals, green theatre tours and museums acting as community energy providers, Julie’s Bicycle is one of the only organisations operating within such a niche.

Founder Alison Tickell heads up a team running a programme of events, offering free resources to companies who want to improve their carbon footprint and herself contributes to international policy development on climate change.

“We need to reduce our impacts rapidly and the creative community is a great place to start," the founder tells Euronews Living. "Disappearing nature is also disappearing culture, it takes with it words, crafts, knowledge and traditions," she continues, adding "this crisis is a cultural crisis." At Julie's Bicycle, the aim is to "interrupt and reframe the stories we tell ourselves" by working together as a creative community.

Historically, the charity has been pioneering important research from the beginning. It initiated some of the first research into carbon emissions generated by the music industry, in conjunction with the University of Oxford in 2008. At that point in time, the UK music market was responsible for approximately 540,000 tonnes CO2e annually.

In 2012, the team announced the launch of a Creative Green certification scheme, which allowed organisations to be recognised as demonstrating outstanding commitment to environmental sustainability. Other tools like the carbon calculator were also part of the Julie’s Bicycle mission to equip companies with auditing tools. The calculator is today translated into seven languages.

What influence has the charity had on the arts industry?

Julie’s Bicycle has been dubbed the “leading organisation working across the cultural community” by the World Cities Culture Forum, because of its unique strategy to “accelerate cultural action on climate change.” Due in part to the charity's hard work, awareness seems to be seeping into the creative industries bit by bit.

The list of British cultural organisations now actively involved with Julie’s Bicycle is impressive. The likes of Glyndebourne opera, the Barbican Centre, the National Theatre and the Old Vic have all received the Creative Green certification. On the contemporary music scene, label Universal Music is now on board, as is the Brit Awards association. All commit to greener production methods, are switching to renewable energy tariffs and crucially, commission and promote creative responses to climate change through art.

After Julie’s Bicycle released a practical guide to green touring in 2015, individual artists started to engage too. In November 2019, Coldplay announced it was refusing to announce a world tour, due to environmental concerns. Young star Billie Eilish made a similar proclamation when she revealed she would be conducting a 2020 green tour. As “the most talked about teen on the planet”, the news invited a lot of attention.

Her statement read, “there will be no plastic straws allowed, the fans are going to bring their own water bottles. There’s going to be recycled cans everywhere, because it’s like, if something’s recyclable - it doesn’t matter unless there’s a recycle bin.”

Pop-rock band The 1975 announced in 2020 that its next London gig would be run on Hydrotreated Vegetable Oil (HVO), a fossil-free renewable diesel fuel produced by processing oils and fats. When used, it produces a 90% reduction in CO2 and is also more weather durable. Band manager Jamie Oborne is directly linked with Julie’s Bicycle, having appeared as a guest speaker at the charity’s recent We Make Tomorrow conference.

Spreading the word all over the UK and Ireland

Similar not-for-profit organisations have since sprung up as a result of Julie’s Bicycle’s initial lead. Creative Carbon Scotland launched in 2011, with a vision to connect arts and culture with environmental initiatives in Scotland. Then in 2019, Staging Change was launched by 23-year-old theatre maker, Alice Boyd, who claims she was “incredibly inspired” by the charity. For Alice, Staging Change came about after a spate at the Edinburgh Fringe left her aghast at the unsustainable nature of the festival. From energy exhaustive theatre shows and the amount of waste generated by paper flyers, to a lack of recycling facilities and no prop sharing at venues.

In Ireland, the Creative Ireland Programme was launched as a five-year governmental initiative running from 2017 to 2022 with similar aims. In order to access our creativity, we must make “climate change a relatable social and cultural issue”, it states. Creative Ireland focuses on changing our “habits of consumption [and] ideas about nature” to positively shape how we interact with our environment.

Most recently, a movement called Music Declares Emergency was launched in the UK. Content head Lewis Jamieson explains why the music industry alone has a vast sphere of influence. The financial power of the music industry in Britain is now valued at £3.5 billion, meaning it’s more important than ever for artists and labels communicate the urgency of the climate situation.

“Where they supply in house catering (for staff or artists), they can green their offering, removing red meat and sourcing food locally to reduce air miles. They can divest pension funds away from fossil fuels, cut down business travel and switch to video conferencing, and look to route tours more effectively,” Jamieson tells Euronews Living. CD shrink wrapping, merchandise and re-purposing unsold products also appear on his long list of recommendations.

While it’s important to recognise the authority one industry can have, it is clear that sectors must unite in order to battle the climate emergency. Lobbying for systemic changes in policy is a must, concludes Jamieson. There is a lot we can learn from the creative fields and its charities like Julie’s Bicycle that will propel us forward towards inventive sustainable solutions.