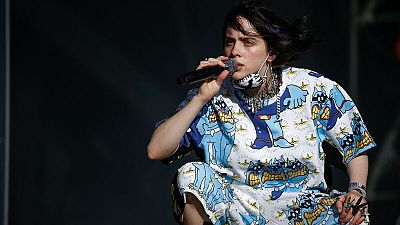 Described as “the most talked-about teen on the planet” by NME, pop singer Billie Eilish is using her worldwide platform to spread climate awareness. The 17-year-old has made the announcement that her 2020 world tour will be consciously acting against global warming.

The Los Angeles born artist, with nearly 40 million Instagram followers and counting, revealed the news on US talk show Jimmy Fallon a few days ago. She described her ‘Where do we go’ tour as aiming to be “as green as possible”, explaining that she is collaborating with non-profit, arts organisation Reverb to achieve this. Reverb, in her own words, specialises in “the best and most healthy, green ways to do everything,” by educating and engaging musicians and their fans to promote environmental sustainability.

She went on to specify more details about the 2020 tour, starting next March, stating:

“There will be no plastic straws allowed, the fans are going to bring their own water bottles. There’s going to be recycled cans everywhere, because it’s like, if something’s recyclable - it doesn’t matter unless there’s a recycle bin.”

But that’s not all. The artist, whose ethereal, melancholic album “When We All Fall Asleep, Where Do We Go?” reached 194 million streams in its first week, is even building a ‘Billie Eilish Eco-Village’ to travel around on tour with her across the globe. Set to perform in countries from Mexico to Germany in 2020, fans will be able to visit the eco-village and learn more about how to live more sustainably, in aid of the climate emergency.

Her Jimmy Fallon appearance was accompanied by a video, initially shared on Instagram, now trending top on Youtube with over 3.6 million views. The video is entitled ‘Our House Is On Fire’, after Greta Thunberg’s now famous speech which silenced a room full of global leaders at Davos 2019 earlier this year.

In the video, Billie appears alongside actor Woody Harrelson, speaking earnestly about the damage we are inflicting on the planet. She begins, “our earth is warming up and our oceans are rising. We cannot let this happen on our watch.”

“Millions of people around the world are taking to the streets on a climate strike, demanding our leaders listen to the science and act,” she asserts, before encouraging her audience to do everything in their power to make a difference. For instance, “cutting out meat and dairy from your diet and reducing plastic use.” Both Billie and Woody also endorse Greenpeace and Fridays for Future, citing them as reliable sources of climate information and action.

What is the carbon footprint of the music industry?

According to a study conducted in 2010, the age of digitisation in the music industry has made a positive impact on the environment. Through comparing music delivery methods, the study found that "purchasing music digitally reduces the energy and carbon dioxide (CO2) emissions associated with delivering music to customers [in the form of hard copy CDs] by between 40% and 80%." The streaming era has brought with it a reduction in plastic use due to less packaging.

However, not everyone agrees the shift is worth it. Kyle Devine's new book 'Decomposed: The Political Ecology of Music' questions the environmentally-friendly assumption of the streaming industry, pointing out that the energy used to power online music listening may in fact be inflicting greater harm. According to Science news platform Phys.org, "storing and processing music in the cloud depends on vast data centres that use a tremendous amount of resources and energy."

When it comes to artists on tour, the first thing that comes to mind is the environmental cost of flying. However, despite the plane-shaming culture nowadays, flying is rarely limited in the industry given that big artists are increasingly reliant on live shows for income. "This makes the cost of environmentally-friendly measures, such as squeezing fewer dates into a tour, harder to bear", reported Crack Magazine in 2018. This is perhaps one indisputably damaging effect of touring.

Julie's Bicycle, a non-profit organisation based in London, compiled an in-depth study back in 2010 to address the issue, entitled 'Moving Arts: managing the carbon impacts of our touring: Bands, Orchestras and Theatre.' The aim was to pave the way for bands, orchestras and theatre tours by helping them to put the environment at the heart of tour production planning. Unfortunately, similar studies have not been conducted en masse in recent years.

"The Climate Coalition welcomes Billie Eilish's pledge to reduce the environmental impact of her world tour and to make her concerts a place where people can talk about climate change. This announcement sends a signal to both the public, and to politicians, that demand for climate action is growing."