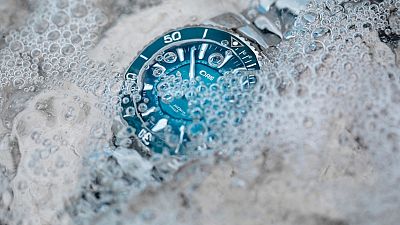 Watches aren’t the first thing you imagine saving the world. Sure there’s always the doomsday clock, but that’s a little more terrifying than it is actually helpful. No, at first glance the world of watches isn’t one in which conservation, sustainability and saving the environment seem to come into it. Look a little bit closer however and you’ll find that the world of haute horology isn’t so disconnected from ours.

There are a few ways you could look at it, be that a marketing ploy for you cynics out there or making sure that there are still people to buy their watches for you idealists. Like everything the truth is somewhere in the middle but who cares? If it helps, it helps – and some watchmakers are really helping – as Baselworld 2019 highlighted.

You see it most of all in their relationship with the oceans. Diving watches are a mainstay of watchmaking; there’s nary a brand worth the name that hasn’t dabbled in the life aquatic to varying degrees of success. In fact, they’ve invested so much in it that it’s not hard to find a handful of brands taking it upon themselves to save the world’s water. Probably the most into it this year is Oris with their triptych of conservation pieces to coincide with the Oceans Project.

As the name suggests, the project is dedicated to protecting and repairing the world’s seas, and have enlisted the help of Oris on multiple fronts. First, there’s the Great Barrier Reef Limited Edition III, a marine blue version of the Aquis. Then there’s the Clean Ocean limited edition in partnership with Pacific Garbage Screening, a project to capture plastics before they make it out to sea using a completely wildlife-friendly floating platform.

There will also be a third member of the trio, but that’s to come later in the year. What we do know is that all three will be presented together in true environmentally-friendly (read recycled) fashion. As it stands, the boxes of the current two editions are partially made from Algae and they each come with a recycled plastic strap along with their bracelet.

It’s not just about the water though, with Carl F. Bucherer getting in on the act. Their partnership with the British Manta Trust charity has given rise to a particularly cool diving watch. The Patravi ScubaTec Black Manta Special Edition is practical enough for purists but with the golden-brown manta ray splashed across the dial doesn’t have much of a poker face. It’s one of the best not because of what it’s saving, but just because it’s cool whether or not you care about rays.

**Breitling**’s conservation angle is perhaps the oddest, if the most practical, primarily because it has absolutely nothing to do with watches, at least before they release a limited edition for it. One of Breitling’s latest squad (#squadonamission) members is explorer Bertrand Piccard , the first man to circumnavigate the globe non-stop. He’s a regular Phileas Fogg, in the Breitling-sponsored Orbiter 3 air balloon. Then he did the same with the fantastic (Omega sponsored) Solar Impulse project. Now he’s back again with the World Alliance for Efficient Solutions – or as I like to say, ‘around the world in 1,000 ideas.’

The concept is genuinely fascinating. Essentially, he has compiled 1,000 ideas and concepts about how we can be more environmentally aware, friendly and generally sustainable in a profitable way. They range from housing projects to renewable energy to farming techniques – anything and everything the world needs to change for the better without sacrificing economic growth. You know, the ideas that’ll actually get passed.

Stepping away from saving the world, one of the biggest feel-good stories this Basel was from Chopard, who are using 100% Fairmined gold. Gold is a huge commodity in watchmaking, with case after precious metal case emerging from the various manufactures. Chopard have therefore taken steps to make sure that their portion of that bullion is at least ethically-sourced.

It’s a great leap, especially when it’s not just for their jewellery pieces. Even their superlative LUC pieces, the new Flying T included, use Fairmined gold. It’s not enough to convince someone to buy a watch over, say, that beautiful flying tourbillon, but that means it’s a genuine commitment more than marketing.

Straps have also been in the limelight this year. Aside from every watchmaker and their various mothers introducing quick change strap systems, the straps themselves are being more scrutinised than ever. Niche horologist Schwartz Etienne prints exotic patterns rather than use the genuine skins and most brands under a century old are using sustainable tanning methods on at least a few straps.

Watchmakers may have a long way to go before a quadruple tourbillon and sustainability can be spoken about in the same sentence, but in general things are getting better. It’s not the same as swapping your hummer for a Tesla, but at least there are some luxury purchases you can get guilt free.