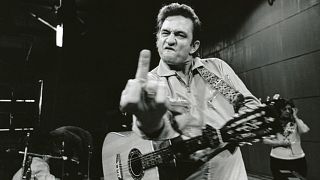 13 January 1968: Johnny Cash takes to the stage for his most unconventional gig, an iconic set for inmates at Folsom jail.

In 1955, Johnny Cash released ‘Folsom Prison Blues’ on his debut album. Cash had been inspired by the 1951 film ‘Inside the Walls of Folsom Prison’.

A cleverly named track, it incorporated traditional folk elements of train songs, prison songs, and blues music. It soon became one of his signature songs as Cash went on to conquer the world of music over the next decade.

The song was popular too with prison inmates across the US. Many would write to the star requesting he perform at their prisons. A man of the people, Cash performed multiple prison gigs, starting with a performance at Huntsville State Prison in 1957.

It wasn’t until 1968 that Cash could attend the prison where the association began. At this point, Cash’s star was waning. He hadn’t had a hit in a while, his drug habit was out of control, and his position with Columbia Records wasn’t as sure anymore.

Cash suggested the Folsom Prison concert as a live album and the label jumped at the idea.

On the day, Cash recorded two gigs, both starting with the titular ‘Folsom Prison Blues’. The final album recording, released 6 May 1968, features the unmistakably raucous prison audience, a non-stop set of hits from Cash, and some brilliant ad-libbed audience interactions.

‘At Folsom Prison’ is one of Cash’s most successful albums and received glowing reviews. In many ways, it’s the definitive Cash release.

A day of classics making waves

It wasn’t just Johnny Cash’s historic concert that took place on this day in history.

Prokofiev himself conducted the symphony in the Great Hall of Moscow Conservatory with the USSR State Symphony Orchestra. The Second World War was still raging and the intro was interrupted by artillery fire. Prokofiev waited for it to end, before continuing his masterpiece. Later, the audience would learn the gunfire signified the Red Army crossing the Vistula into Germany.

Top tip: if you’re a serial killer and want to do something big, don’t go for the 13th of January. It’s an already crowded date for killer events.

In 1992 on this day, Jeffery Dahmer, the American serial killer and sex offender who killed and dismembered seventeen men, pleaded guilty to 15 counts of first-degree murder.

Over in the UK, Harold Shipman, otherwise known as Doctor Death, is one of the country’s most prolific serial killers with an estimated 250 victims during his career as a doctor.

In 2000, Shipman was found guilty of murdering 15 patients in his care and was sentenced to life imprisonment. He would only spend four years in prison though as he hanged himself in his cell on this day in 2004.