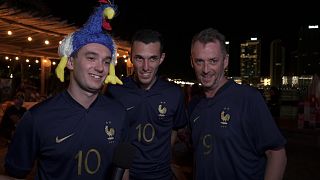 Global sporting tournaments bring communities together. Right now, the spotlight is on Qatar, host of the FIFA World Cup 2022. Fans from 32 countries and beyond are attending the games, but it isn’t only the host country that’s experiencing an influx of visitors from all corners of the globe.

In nearby Dubai, a gateway to the games with daily shuttles taking fans in an out of Doha, football is bringing multi-cultural crowds together in mega fan zones. Any sporting rivalry is underpinned by a shared passion for the beautiful game, and – in a city of expats – it unites fans far from home.

Beyond the big tournaments, the sport can be pursued all year round in Dubai at supporters’ clubs, as well as live events hosting football stars and football academies established by ex-professional players.

“Dubai is a thriving football area. There are a lot of opportunities for new coaches and it's a great place to live,” says Guthrie. “EPC has young players from all over the world who come together as a team. They live together, guys of all different nationalities and cultures.”

A regular event in Dubai’s football calendar, Hollywood Balls is a live chat show, hosted at The Dubliner’s at Le Meridian Dubai and simultaneously broadcast globally online ahead of matches. Famous footballers join founder and host Pete Redding on the sofa to discuss upcoming games in front of melting-pot audiences from diverse origins, united in their appreciation of football.

“Football is a little different here in the UAE than it is anywhere else in the world. People supporting different teams are living side by side. You have rivalry – the rivalry stays – but there's more of a feeling of togetherness,” says Redding.

“Hollywood Balls brings communities together from all over the world,” he adds. “Football fans from all nations, from Africa to Australia, come here to the venue to watch the show in person and online, as well as rival fans from competing teams, the likes of Liverpool and Manchester City, and Newcastle and Sunderland, all mixing together. It makes for a real family atmosphere, a really good day out.”