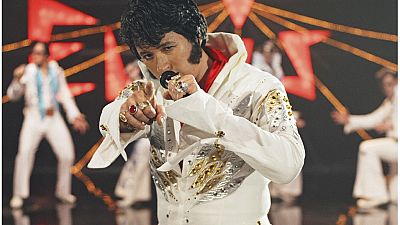 If you listen very carefully, you may still be able to hear it ... the sound of thousands of people clamouring for "A Little Less Conversation" and many other Elvis hits as last weekend was the largest Elvis impersonator festival in Europe -- "probably the world", at least, according to event organisers.

Taking place in the tiny beachy town of Porthcawl in Wales, Elvis impersonators flocked from all corners of the globe to pay homage to the King of Rock and Roll.

There were ultra-slick professionals, known in the game as ETAs (Elvis Tribute artists), all the way through to the not-look alike, don't-sound alike, but I am going to put on a wig and a jumpsuit anyway.

Euronews Culture is renowned for walking where other arts and entertainment sites fear to tread, so your intrepid reporter talked to some of the performers who were all shook up and those best left to jailhouse rot ... whoops, rock, of course.

Jason Dale is a veteran ETA, zig-zagging across the UK to perform shows on an almost daily basis. He has belted out Elvis numbers in warships, retirement homes in Newcastle, karaoke bars in Benidorm and everywhere in between.

But Jason rejected the label of impersonator, though he did say he was “fortunate to have the height, build, physic and natural presence” of the King.

“Truth is, I don't impersonate,” he said. “We’re paying tribute to Elvis.”

Perhaps because the term carries negative connotations and implies a lack of authenticity, some ETAs think of themselves as superfans, working to keep the legacy of Elvis alive.

“Some people want to be an ETA because they like the costume and get to wear a wig, others because there are girls about,” said Jason. “But, for me, it is because of who Elvis was.”

“Elvis had it all. The glamour, the glitz, the wealth, the looks, the charisma, everything, [but] he was a normal guy and I think people pick up on that,” he said. “Everybody dreams at some point in their life and Elvis embodies the American dream.”

“And don't forget the God-given talent.”

For Jason, what makes a good ETA is their love of Elvis.

"Age, creed, colour, male, female, it doesn't matter. The only qualification you need to be truly successful tribute artist is to be a fan,” he said. “You've got to sing and perform from your heart to touch the hearts of others.”

Typical of his generation, Jason first heard Elvis by chance on the radio in the 1960s when he was just six years old.

“Elvis touched me in a way I can't really describe," he said. "I felt something powerful within his voice."

Jason picked up a guitar at eight – having been taught a few cords by some nuns at a convent — and was performing "Blue Suede Shoes" as Elvis in a singing contest two years later. The rest, you may say, is history.

But you don't have to be a man to be Elvis. Sheryl Scharkie was one of the first-ever female Elvis impersonators in Australia.

Wearing a frangipani beach shirt and a pair of big black boots, the 64-year-old first performed as Elvis for a “laugh” at a singing contest during a dedicated Elvis festival in New South Wales.

While she didn't win, someone came up to her afterwards and said “you’ve got the voice, you know the songs, dye your hair, put on a jumpsuit and you’ll be fine.”

Since then, she has spent the last decade performing as ShElvis, while working part-time as a nurse, and even been admitted into the Elvis Hall of Fame.

Despite feeling she has the voice for it, Sheryl says she faces an uphill struggle because of her gender.

“It is harder to get gigs because a lot of agencies don't think that a female can do Elvis justice,” she said. “I have to do a lot of convincing.”

All of this goes out the window when Sheryl gets up on stage, however.

“Once the singing stars, they [the audience] get caught up in the music and gender goes out the window,” she said, adding that she gets “a kick" out of defying people’s expectations.

“I know what they [the audience] are thinking, Jesus, here’s a woman trying to do all this. Then I open up my mouth and start singing Kentucky rain and they just go oh my God."

Sheryl joked that she can never be Elvis – firstly because she “flunked the physical'' – but for her, that is beside the point.

Like Jason, she says the most important aspect of being an ETA is paying tribute to Elvis’s music – something that is completely irrelevant to one’s sex

‘The King from Beijing’

Paul Hyu pushes the fluidity of Elvis impersonation to the limit. His award-winning act Chinese Elvis blends Elvis’s music with stand-up comedy and a good dash of showmanship.

Trained as an actor, starring in several films and British TV series, Paul has performed Chinese Elvis to the likes of Bob Geldof and Angelina Jolie.

He thinks his act is both “funny” and “interesting” for people in Britain because of a “comedic dichotomy existing between the relatively unknown identity [of being Chinese in Britain] mashed into the most identifiable, easy, recognisable identity of Elvis."

“Chinese Elvis as a concept is inherently just funny,” he says, adding “well that is my theory anyway.”

Paul takes Elvis as the source of inspiration for an on-stage persona who - like Australian actor Barry Humphries' Dame Edna – thinks he is better than you.

Blending Asian jewellery with quintessential Elvis jumpsuits, Chinese Elvis will “take the piss out” of the audience, pretending that he is in fact the real, original Elvis.

Unlike Sheryl and Jason, Paul sees himself as reimaging Elvis, pushing the “tired old trope” into new, creative directions.

“I am not doing Elvis at all,” Paul said. “You’re getting Chinese Elvis.”

“I don't pretend to be him,” he added, striking himself apart from “those in expensive suits with a wig on,” though Paul says he can actually sing like the King.

However, Paul’s unconventional reimagining of Elvis has brought him into conflict with what he calls “purists”, who have created rigid rules about what – and who – can be Elvis.

“There's quite a lot of people who will say you can't sing this song and wear that outfit or you've got to do this because that's what Elvis said,” he says. “It is fucking ridiculous.”

When Paul started performing in the early 2000s, he claimed “old, white, racist geezers” were in charge of the Elvis scene.

“They didn't like the fact that there was a Chinese Elvis who made more money in one gig than they made in an entire year,” he laughed.

But Paul stressed he was not saying that he is better than other ETAs “because I know I am not.”

“I want to make the point of how stupid the whole Elvis paradigm is - where Elvis has to be this, that or something else. I think this whole kind of obsession with fixating on something that pre-exists and trying to mimic it is absurd,” he says. “The whole idea is to try and find new stuff in the pre-existing text.”

And for Paul such creativity is the true legacy of Elvis.

As a “massive creative artist”, Elvis took the main influences of his day and pushed them into something new, exciting and ahead of its time.

“He would say that Chinese guy is much more like me,” Paul believes.

Elvis Presley fans celebrate in German city where he lived