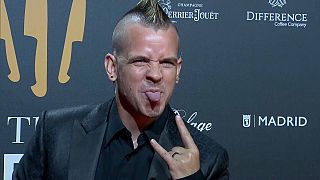 Dabiz Muñoz in Madrid after being named the best chef in the world.   -   Copyright  European Broadcasting Union
By Euronews  •  Updated: 22/09/2022

A restaurant decorated with flying pigs, and its mohawk sporting owner, are making waves in the culinary world.

DiverXO in Spain's capital has won the title of the best restaurant in Madrid. And its founder, Dabiz Muñoz, has been named the best chef in the world for the second year in a row.

Spain's ‘enfant terrible’ is a three-time Michelin star who received the Best Chef Awards title in front of several hundred of his counterparts who had gathered in Madrid.

Despite the prestige and international recognition, Muñoz received the honour with humility.

"I do not feel like the best chef in the world, far from it. But I believe I have the best team in the world," he said accepting the prize on the stage.

DiverXO can cost as much as €365 per person. For that price, customers can enjoy a 12-course tasting menu that is meat-heavy meal, an experience that has been described as a "hedonistic and creative gastronomic journey."

DiverXO does not have vegetarian or vegan menus.

It is also eccentrically decorated, with ice cream cones scattered across the room and flying pigs passing through its walls.

Muñoz became interested in the culinary world when his parents took him to Abraham Garcia’s Madrid restaurant, Viridian when he was a child. Garcia is also a multiple award-winning chef based in Spain’s capital.

After his childhood dining experience, Muñoz attended catering college before gaining experience in other restaurants in his home country and abroad, including London.

Muñoz was not the only chef honoured during the event, as another 99 chefs were also recognised.

Meet the child chef cooking up a storm in Kenya