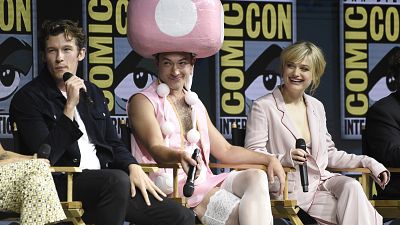 Content warning: the following article contains references to abuse and language that some people may find offensive.

Ezra Miller has broken their silence over the allegations of increasingly bizarre behaviour in recent months.

The 29-year-old non-binary actor apologised and stated he is seeking treatment for “complex mental health issues”, according to a statement they released to Variety.

“Having recently gone through a time of intense crisis, I now understand that I am suffering complex mental health issues and have begun ongoing treatment,” Miller said.

“I want to apologise to everyone that I have alarmed and upset with my past behaviour. I am committed to doing the necessary work to get back to a healthy, safe and productive stage in my life.”

How Miller went from one of the most promising young stars of Hollywood to a potential terror on the streets has been quite the journey.

We need to talk about Ezra

The star of the upcoming _The Flash film_rose to prominence as an indie heartthrob in The Perks of Being a Wallflower, but it was perhaps their other formative role as the psychopath in We Need to Talk about Kevin that would have more in common with their public persona in 2022.

But what has Miller actually done?

The multiple incidents that Miller has been implicated in range from allegation claims to charges which they have accepted. Many of the alleged incidents involve violence against women.

The first major incident was a video in 2020 which appeared to show Miller strangling a woman and throwing her to the ground in Reykjavik.

Then, in early 2022, Miller told Insider that they wear a bulletproof vest and carry a gun due to fears of the Klu Klux Klan and the FBI. Miller even posted a video on Instagram that seemed to threaten members of the KKK.

Miller got their name in the news again when they were arrested in March this year.

Hawaiian police arrested Miller on March 28 after they were involved in a fight in a Karaoke bar.

After that, the incidents started flooding in, as Miller’s villain arc started to take shape. Hawaiian law enforcement reported 10 police complaints about Miller before the karaoke bar incident.

Miller pleaded no-contest and had to pay a $500 fine, only a few hours after they were arrested for a second time in Hawaii.

This time, Miller had been arrested on second-degree assault charges for throwing a chair at a 26-year-old woman.

The couple who had paid Miller’s fine then filed a restraining order against him, stating that Miller had burst into their Hawaii hotel room and shouted “I will bury you and your slut wife.”

A series of restraining orders followed. The first was filed by the parents of Tokata Iron Eyes, an 18-year-old whose parents claim began a relationship with Miller when they were 12 and Miller was 23.

Iron Eyes flew to London in 2017 to visit Miller on the set of Fantastic Beasts: The Crimes of Grindelwald and dropped out of school in 2021. Iron Eyes’ parents claim Miller “brainwashed” them using “violence” and “intimidation” to manipulate them.

In June, a mother and 12-year-old child were granted a temporary harassment prevention order against Miller in Massachusetts.

Another report came out that Miller was housing a mother and her three children in their Vermont home. But the house was littered with guns and the one-year-old child at one point put a bullet in her mouth.

Police have since enquired at the Vermont home to issue care orders, but Miller has insisted they don’t live there anymore. Court documents have proven otherwise.

Finally, Miller was charged with felony burglary in Vermont on August 7 and will appear in court for the charges in September.

A bad time for DC

While it’s good to hear Miller is looking into treatment, the films they're associated with are now in turmoil.

Things have gone from bad to worse at DC and Warner Bros. Earlier this month, the studio announced it was completely shelving the completed Batgirl film despite its $90 million budget and star-studded cast.

Batgirl was set to see the return of Michael Keaton in the role of Batman, one he hasn’t played since the Tim Burton film Batman Returns in 1992. Keaton also features in 2023’s _The Flash,_which has finished filming.

Rumours abound already as to whether DC will recast Miller entirely and re-film their scenes in The Flash, given the swarm of bad press around their name. Time will tell if Miller's apology is too little too late.