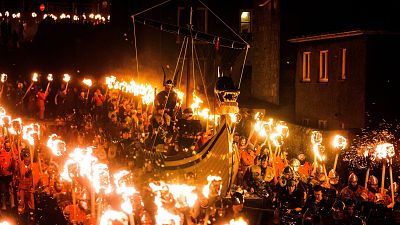 The Up Helly Aa fire festival, celebrated in the Shetland town of Lerwick, will allow women to take part in the 'fire squads' for the first time next year.

This announcement by the Lerwick Up Helly Aa Committee lifts a long-standing rule of male-only participants.

It comes after members discussed how to take the occasion forward following a two-year hiatus due to the pandemic.

What is the Up Helly Aa festival?

This spectacular annual event sees thousands of people dressed as Vikings march through the Shetland town of Lerwick, Scotland, while carrying flaming torches.

They are led by a large squad of Vikings, known as the Jarl Squad, who in turn are led by the Guizer Jarl, or Chief Guizer, who is elected by a committee each year.

The procession heads down towards the sea, where participants throw their flaming torches into a specially-built Viking longboat, otherwise known as a galley.

The occasion, which is considered to be Europe's largest fire festival, started in the 19th century as a way to mark the end of the yule season. It's also a way to celebrate Shetland's Viking past.

While women have traditionally been restricted to less significant roles in the festival, such as hostesses who take charge of organising the town parties, they can now take part in the Viking squads.

However, some criteria for participation still remains:

You must be aged 16 or older and have lived in Shetland continuously for at least five years.