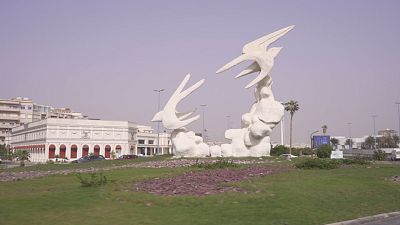 In this edition of Inspire Saudi, we explore the vibrant port city of Jeddah. From the tree-lined  Corniche with its artistic sculptures to the historical district of Al-Balad that dates back to the 7th century, the city is a captivating hub and melting pot of cultures and flavours.

Visitors from all age groups can experience diversity, modernity, and authenticity within huge wide-open spaces and spacious exhibition centres. For those that are craving culture, history and creativity after the two years of the COVID-19 pandemic, there’s something for everyone in Saudi, whilst still managing to social distance.

Arts and culture run through the very DNA of this city. It's home to Saudi Arts Council's 21,39 Jeddah Arts Exhibition as well as Hayy Jameel, Saudi's dedicated art space.

From the tree-lined Jeddah Corniche (waterfront) peppered with sculptures to the contemporary art space that is SAC the city is awash with artistic flair. The ninth edition of 21,39 Jeddah Arts exhibition is called Amakin, and artists were invited to explore their relationship with a Makan or place.

Lujain Faqerah is an artist in Jeddah and she said the exhibition has covered many themes.

"Jeddah Arts 21,39 is one of the oldest art exhibitions here in Saudi. So it's very collectivistic of all the artists, not only the locals but also from all around the world. Every year it comes with a theme that is more interesting than the year before."

Across town, the newly opened Hayy Jameel Art Centre is a multidisciplinary cultural hub and Saudi’s dedicated home for the arts.

Rahul Gudipudi, Exhibitions Curator, Hayy Jameel said "Hayy Jameel is really becoming this crucible and intimate space for creatives to really nurture each other's practices and learn from each other and learn from the larger community. Both that is for the longest time been situated in Saudi, but also the international community."

This cross-pollination of creative disciplines has placed Jeddah firmly on the artistic map all year round.

Al-Balad is the historical part of Jeddah and is now a UNESCO World Heritage site. It's also played host to the Red Sea International Film Festival.

Local filmmaker, Lina Malaika, shot her directorial debut here and she explains why this city was a perfect backdrop for her film.

"I grew up admiring film. I feel like it's the best way for me to convey any message that I have. So, I studied filmmaking in New York. As of last year, I co-directed a movie with my dear friend David Dark. It's called Maskoon. It's a psychological thriller. And we shot the entire movie in Al-Balad. If you walk through Al-Balad, you'll notice that it's the perfect film set and for Maskoon it was actually one of the main characters."

"The plot of the film revolves around Al-Balad. At the same time, you get to showcase the beauty of the arts and the culture, and the rich heritage that we have. The movie was selected to premiere at the Red Sea International Film Festival, which was the first of its kind. When I decided I wanted to do filmmaking it was uncommon."

"I did it regardless. And look at where we are today. It's being appreciated and supported by everyone. I'm very proud to be a Saudi filmmaker. But with that, obviously comes a huge responsibility. I need to make sure that I create dynamic, informative and elaborate work that actually represents who I am and my country."

From the waterfront central fish market to the many food trucks dotted around the city,  Jeddah is full of flavours. Saudis are well known for their hospitality and Euronews checked out some of the best places in town to tickle your taste buds.

The beauty of being a port city means fresh fish is high up on the menu at many establishments. Baeshen has garnered a legendary status amongst foodies.

Abdullah Thabit, Jeddah.story told us food is an art form too.

"This is the most famous restaurant in Jeddah. Food is a flavour. Food is an art. Now we have so many chefs that they are presenting their arts, their dining, their catering. We are hosting people from everywhere."

Wherever you come from, it's a must to check out the freshly baked Arabic bread. Forn Al-Shaikh is one of Saudi's oldest bakeries, founded more than a 100 years ago.

"If your dish is colourful, you already have a 30% you win with," explained Yeap. "Then the 70% will be based on the texture, on the food, and the flavour. I put a lot of colourful [food] on my dish. Not only to attract the people, [but also to] attract the eyes."

As well as the Jeddah Season 2022 cultural festival there are still many colourful events, just as sport and lively entertainment which take place during the year in Saudi. There were 15 million visitors who attended the 7,000 events during the Riyadh Season which covered 14 zones and ended in March.

Saudi Arabia is open to tourists, here's why you should go