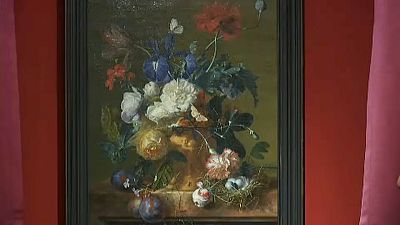 'Vase of Flowers' by the Dutch master Jan van Huysum was returned to the Uffizi Gallery in Florence on Friday after the painting had been stolen over 75 years ago by German soldiers.

The painting was originally hung in the gallery in 1824 before it was taken by Nazi soldiers while they retreated north during World War Two.

The work remained lost for several decades until 1991 where it resurfaced following German reunification.

The Italian minister of foreign affairs, Enzo Moavero Milanesi, celebrated the team effort it took to return the painting.

"This story is a beautiful story because it involved a truly coordinated effort allowing us to bring home an important picture that was originally part of these collections," he said. "Now it can live in these collections alongside other important paintings. It is a story with a happy ending, a very European story."

The family in possession of the 'Vase of Flowers' demanded up to two million euros from German authorities in exchange for the painting.

German law puts limitations on crimes of more than 30 years old which prevented the government from claiming the painting as stolen.

A legal battle ensued between the government and the family. The authorities stressed the painting had been stolen, meaning the soldier who took it could not be seen as the owner and did not have the right to bequeath it to anyone.

The lawyers of the family argued the soldier had bought the work at a market.

Explained: The story of Paris' liberation from the Nazis, 75 years on