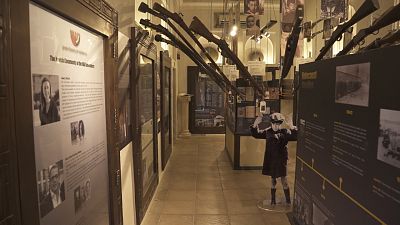 A Holocaust Memorial Exhibition, which is the first of its kind in the Arab world, has opened in Dubai.

The "We Remember" exhibition at the Crossroads of Civilizations Museum showcases first-hand testimonies of Holocaust survivors.

Rabbi Levi Duchman, Rabbi to the UAE, told Euronews that it is key to helping build the foundations of the Jewish Community in Dubai.

"The fact this museum has put on a holocaust memorial display is something really important. It’s a place where we can bring our children. We could bring schools from different communities to come to see the history of the Jewish people and what they went through in Europe." he said.

More than six million Jews were killed by the Nazis between 1941 and 1945. This exhibition aims to remember what happened during the Holocaust and raise awareness among the more than 200 nationalities in Dubai.

Curated by Yael Grafy, it also includes a section dedicated entirely to Arabs and Muslims who helped save Jews.

"This is one of the biggest crimes against humanity. It was really important to us alongside the other galleries about tolerance and other communities… we wanted to show the hope and show the Muslims and people from the area that helped to save people." Yael Grafy said.

A life-sized image of a young boy, 'Warsaw Ghetto boy' surrounded by weapons from the war is the centre piece of the gallery. Other highlights include the stories of Selahattin Ülkümen – the Turkish diplomat who helped to save some of the Jews of Rhodes from deportation, and Dr. Mohammed Helmy – an Egyptian doctor who saved several Jews from Nazi persecution in Berlin.

The museum's founder, Ahmed Obaid AlMansoori, said that the timing of the show is appropriate as parts of the Middle East region open up and moves are made towards normalising relations between countries, "there have been many incidents and trends of a rise in antisemitism lately and racism in the world, so I think this is the right time for it." He said that Dubai has a "system and culture of union and solidarity" adding "this is the place where people can come and learn from our experience of union."