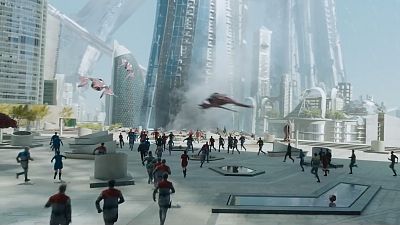 Action! That's the word being heard more and more in Dubai as the city becomes increasingly appealing to the international film industry.

Star Trek, Vanguard, and Mission Impossible are just some of a few big-screen blockbusters that have been recently filmed in Dubai. Local production company, Filmworks, has seen the sector rapidly grow over the past two decades. Julie Smythe is chairperson of the FilmWorks Group. She told me a bit about the company's modest beginnings:

"Well, we opened our doors in 1998, and at that time there wasn't too much international work coming into the country.

"After a few years, that started to change and we started getting much bigger directors coming in.

That first feature film was Syriana, a geopolitical thriller that came out in 2005. It centers on oil politics and features an all-star cast including George Clooney, Matt Damon, Chris Cooper, and Jeffrey Wright. It won Clooney the best-supporting actor Oscar in 2006.

_What happened after Syriana? _

According to Julie Smythe, the industry started to grow really quickly after the film. She compares it to the growth of Dubai during the same period.

The film industry in Dubai is now currently worth 420 00 000 million euros to the local economy. The Film and TV Commission there encourages the production of foreign films within the city. Jamal al-Sharif, the CEO of the commission, explains why Dubai is becoming a popular destination for filmmakers to me:

"We should be able to manage their production as fast as possible and lower their costs.

"We have worked with many productions and we were able to reduce their cost up to 40 or 50 percent.

"Any production today brings in a value to the economy.

"So it's considered adding value to our GDP.

"For example, Star Trek was one of the largest Hollywood films that was shot here in Dubai, and it brought in over 30 million dollars, spent in Dubai."

But it's not all about the big-budget movies. Award-winning independent filmmaker, Faisal Hashmi, has international critical acclaim for his short films.

He gives me the style and editorial reasons behind why people are interested in his films:

"A lot of the films that I do are more on the horror and thriller sort of side of things.

"So it's been exciting to submit to festivals in Europe and the US and people are like, oh, I want to see that movie.

"Just out of curiosity of what's horror like from that region.

"So it's been exciting to show that to the rest of the world."

It’s time! ? Presenting WICKEN - a little horror short film I wrote and directed in Dubai with a great team.

Sit back and enjoy. And if you dig it, please share it. Support indie film and horror in Dubai. It really goes a long way.#BewareTheWickenhttps://t.co/hInVyYeExF

There's support and encouragement for the next generation of talent in the city. 10-year-old Dubai born, Eva Petersen, has just auditioned for an acting role with international star, Ben Affleck. She's looking forward to finding out whether she's got the part, but she's also excited about getting more auditions and being able to work within the industry.

The changing face of Dubai's film industry reflects Eva's enthusiasm as it starts to take centre frame on the big screen.

Controversy over Golden Globes leads NBC to pull out for 2022