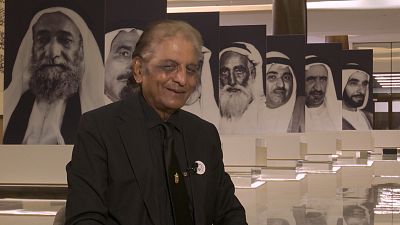 He’s known as the unofficial royal photographer of the Dubai Royal Family.

Ramesh arrived in Dubai on a boat from Bombay in 1965. He has since documented Dubai's transformation over five decades from one of the sheikhdoms of the Trucial States to the most populous city of the UAE – and a global hub.

I sat down with him at the Etihad Museum which showcases some of his most important works. We also travelled to Dubai Creek with his son to discuss how Ramesh got some historic shots there - and also to look at how dramatically the landscape has changed since he arrived.

Ramesh disembarked from his boat at Dubai with 55 rupees – worth less than a Euro now. He also had his Rolliecord camera that had been a gift from his father – and very little else. His wife Taru and son Neel followed later.

Neel, an art consultant and interior designer, says that Dubai Creek brings back happy memories for him:

"This was truly my playground! This is where I grew up. The Creek was my life.

"On early mornings, my father would wake up and I used to be his sidekick. We used to explore this area."

Ramesh’s work can be seen across Dubai, from the walls of its metro stations as well as in the galleries of the Etihad Museum. Among his most famous photographs is the signing of the treaty for the formation of the UAE.

Ramesh remembers well the moment the United Arab Emirates was created in that treaty signing:

"Afterwards, outside with all the sheikhs - I took (another) picture. I took the picture and my hands were shaking!

"Afterwards, after the speeches, Sheikh Zayed looked at me and smiled!"

Ramesh’s wife Taru was a lab technician and she was the one who would actually develop the photographs in their makeshift studio at home.

"If you saw our home, it was a multipurpose room which served as bedroom, kitchen and dark room.

"So we had two sets of dishes, crockery and metal plates. The plates are called thali in India.

"One thali was for developing the negatives and the other thali was for eating, so every time we ate, we had to smell the thali. If it smelled like chemicals, that’s not the one you eat from!"

Ramesh has never sold his royal photographs for commercial gain. He always wanted to protect the legacy and history of the nation.

This is something he continues to do and he assures me that he won't be putting his lens cap back on anytime soon!