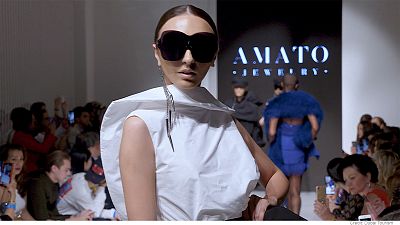 Designers and industry professionals are flocking to Dubai, which is fast making its mark on the industry.

Events like Arab Fashion Week in Dubai are helping the emirate makes inroads in the industry, which is now worth around 50 billion euros a year in the UAE.

“You can feel there’s a very interesting energy and very strong creative vibe,” he told Cult. “And what I think is really interesting about Arab fashion in general is the diversity of the options.”

Arab Fashion Week is one of the highlights on the industry’s calendar.

It’s a platform for international and home-grown talent to showcase their designs. It also attracts around 10,000 people every year.

Dubai-based Amato is a global designer brand and couture house with a cult following, having dressed the likes of Beyonce, Shakira and Katy Perry.

It’s headed up by Philippines-born designer Furne One.

“It all started with Heidi Klum. A friend of Heidi’s saw my collection and then we did a meeting and they proposed for me to do their finale show, and then I met Katy (Perry) and Katy at that time was planning her California Dreams tour so she told me to do the costumes for her.”

Furne credits Dubai as a creative inspiration for his work.

“Dubai itself has this identity because we’re the melting pot in the Middle East and the Gulf. Me as a designer, I love elaborate things and they love artistic things you know so that’s why I fell in love with Dubai.”

Fashion with a conscience is a priority for a lot of brands in Dubai.

GoShopia is Dubai’s first ever sustainable fashion e-marketplace. It brings together designers and brands that have a more ethical approach in their mindset.

Araceli Gallego, founder of goshopia.com, says: “We want to change the way we perceive fashion basically. We want to make sure people understand there is another way to dress nicely and be fashionable by being sustainable at the same time. We want Dubai to become one of the hubs of the fashion world.”

“I believe Dubai is very influential not just for fashion but for many things,” he told Cult.