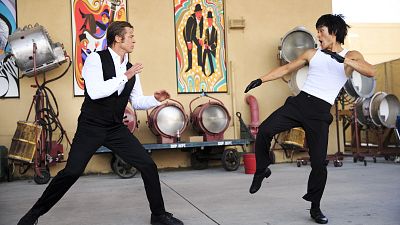 From left, Brad Pitt and Mike Moh in "Once Upon a Time in Hollywood."   -   Copyright  Andrew Cooper Sony Pictures
By Ethan Sacks  with NBC News Entertainment  •  Updated: 29/07/2019

Actor Mike Moh had two months to train and rehearse for his big backlot brawl scene as Bruce Lee in director Quentin Tarantino's "Once Upon a Time in Hollywood," but he's been preparing for this role a lot longer.

He has been getting ready ever since he first watched a VHS tape of Lee's 1973 martial arts opus, "Enter the Dragon," when he was 8 years old.

"I lived in a small town called Woodbury, Minnesota, where 1 percent or less of the population were minorities, so I definitely felt a sense of otherness," Moh, 35, a Korean American, told NBC News. "And at that point in my life, I probably wished that I wasn't different and was trying to figure out how I fit in."

Here was this warrior, unabashedly embracing his Chinese heritage to impress the ladies and beat his enemies — literally and figuratively.

"That's why representation is so so important because if I hadn't seen that archetype, I might still be looking for a way to fit in," said Moh, who grew up to become a fifth-degree black belt in taekwondo and teaches at his own martial arts school in Waunakee, Wisconsin.

Forty-six years after Lee's abrupt death at the age of 32 from a cerebral edema on July 20, 1973, the martial art's legend may finally be ready for his close-up.

A new audience will get to appreciate the swagger and fluid grace of Lee in his prime, courtesy of Moh's performance in Tarantino's homage to the showbiz industry of the late '60s in "Once Upon a Time in Hollywood," which opened in theaters Friday. But there are other reminders of just how far the legacy of the San Francisco-born, Hong Kong-raised action star has extended.

"He essentially launched the kung fu craze, which eventually took over all action choreography, including the Marvel movies," said Matthew Polly, author of the biography, "Bruce Lee: A Life."

Even though it lasted just one season, his first major U.S. role was in 1966 as the martial arts savvy chauffeur on the television show, "The Green Hornet," and it is credited with driving up major interest in martial arts in the United States. But it was the box office success of "Enter the Dragon," a Hollywood co-production filmed in Hong Kong, that launched a fervor in martial arts films on this side of the Pacific — paving the way for future stars such as Jackie Chan and Michelle Yeoh to cross over to the West.

"I can say that I definitely would not be where I am today without Bruce Lee," Daniel Wu, the star of AMC's martial arts series, "Into the Badlands," said by email.

"He showed that it was possible for an Asian male to be in entertainment in America. He also made me feel proud to be Chinese and that maybe I should learn kung fu to be closer to my culture."

With his combination of physicality and spiritualism, Lee also greatly influenced future waves of filmmakers of all backgrounds — including Tarantino, who included the flashback sparring session between Lee and Brad Pitt's fictional stuntman, Cliff Booth, as a tribute to Lee.

The fight may be made up, but it channels Lee's well-documented penchant for schooling Western stunt crews on his Eastern philosophy.

"Quentin was wearing his Bruce Lee shirt and yellow jumpsuit (like the one worn by Lee in 'Enter the Dragon') when he showed up to direct the scene," recalled Moh, who was dressed in Lee's actual chauffeur jacket from "The Green Hornet" for authenticity.

"He didn't say action, he said, 'Okay Bruce, the Little Dragon is here and your stuntman friends in the cast are with you, so teach them.

Wu, however, points out that even Lee couldn't fully kick the door open for other Asian actors, who are still among the most underrepresented demographics in film and television. Just like his predecessor, the California-born Wu had to first establish himself as an action star in Hong Kong before the entertainment industry in his home country took notice.

"Much like Bruce, I still had to develop a career in Asia for 20 years before I had the opportunity to come back to America and work here," Wu said.

"Seeing that the opportunities are far and few between, I definitely feel my presence in the American entertainment industry is important for future generations," he added. "I've already had Asian Americans kids tell me they want to go into acting and were inspired by seeing a heroic character like Sunny on 'Into The Badlands.'"

Polly points out that the rise of China as a box office power and the success of "Crazy Rich Asians" have likely been more responsible for a recent influx of Asian actor-fronted movies like "Shang Chi" than Lee was five decades ago.

Lee himself didn't get to enjoy all the fruits of his eventual superstardom — dying a month before "Enter the Dragon" was released in the U.S. Polly said that Lee had two sequels already greenlighted for the film, and there was a million-dollar offer coming in from Italy after the popularity of his previous Hong Kong films, "The Big Boss," "The Way of the Dragon," and "The Fist of Fury."

In fact, Lee had to go to Hong Kong, where he had made movies as a child star, to find the success that had eluded him in Hollywood.

"The major issue was no one in Hollywood could see an Asian as the lead of a movie or a TV series at the time," Polly said. "That fundamental prejudice was what he was up against."

That was one adversarial force even Lee couldn't beat.

By the era of the Manson Family murders in 1969, the period in which "Once Upon a Time in Hollywood" is set, Lee was struggling to get bit roles on television, making most of his income training A-listers such as Roman Polanski, Steve McQueen and James Coburn off screen. Lee was underappreciated back then, something Moh hopes to change now.

"The goal for me with this performance is for people to get introduced to Bruce," Moh said. "To see who the real Bruce was and how amazingly ahead of his time he was."