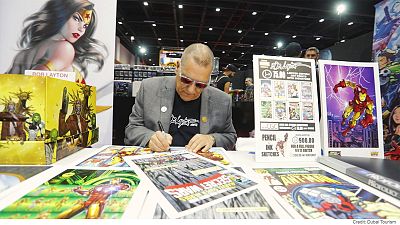 It is proving to be a major year for film and television, with the release of the final Star Wars movie, the long-awaited Avenger's: Endgame, and the last-ever series of Game of Thrones, among plenty of other titles to look out for.

Around 50,000 people were expected to attend the three-day event, which featured celebrities such as Shazam's Zachary Levi, Game of Thrones' Iwan Rheon, Arrow's Katie Cassidy, Marvel's Benedict Wong and Tara Strong, who has voiced various video game and television characters.

In previous years, the convention has hosted many iconic celebrity guests, including Gillian Anderson, Christopher Lloyd, William Shatner, and even former Marvel Comics editor Stan Lee, who died in November 2018.

This year, visitors to the convention also had the chance to meet renowned comic-book writers and illustrators, such as Bob Layton.

Layton has drawn and written for Marvel, Valiant and DC, and is known for "reinventing" the Iron Man comic, as well as co-creating War Machine, The Huntress, and Ant-Man (Scott Lang).

He said: “My association with Iron Man has been 40 years and it’s gone through so many evolutions. Now my name is synonymous with the character. Having a chance to get together and share with everyone and share the experience and relate your love and passion for it, or listen to the people who create them and find out the behind the scenes stories. All that sort of thing is terribly exciting.”

Those who attended the convention had the chance to take part in gaming play-offs and test the latest technology being used by the industry.

However, most fans saw the convention as the perfect opportunity to dress up as their favourite characters and meet other people who share their passion for film, television, comic books, and video games.

Ross Marquand, who plays Aaron in The Walking Dead, made his first trip to the Middle East to appear as one of the convention's celebrity guests.

He said: “It is amazing that whenever we go on press tours and everything, no matter what part of the world we are in, people get genuinely rabid about the show. And it’s great! I’ve not seen a more well run and a nicer group of people, both the staff and also the fans. Just meeting and interacting with everyone has been wonderful. They’ve been so welcoming and my first time in the Middle East has just been fantastic!”

Comic conventions take place all around the world, but organisers say that the diversity of the audience in Dubai is what sets MEFCC apart and makes it stand out globally.

Michael Lambrecht, MEFCC exhibition manager, said: “What makes a Dubai comic con very special is that when you go up somewhere like San Diego or New York it’s very kind of centric to that country. Whereas a Dubai comic com is like a mesh pot like of everyone else here in the country."