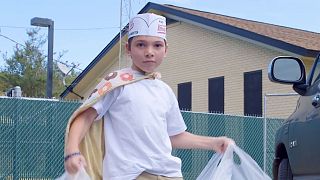 With dozens of doughnuts tucked under his arms, 'Donut Boy' Tyler Carach heads off on another delivery to thank police officers for their work.   -  Copyright  60 Second Docs Courtesy Carach family
By Tracy Saelinger  with TODAY Food  •  Updated: 08/02/2019

Tyler Carach says he's sick of doughnuts — but for a good reason: The 11-year-old has now delivered more than 75,000 of them to police officers in 41 states — in just two years.

"Yet, he still eats them," jokes his mom, Sheena Carach, a former police officer herself, who accompanies Tyler on his road trips to deliver the sweet treats.

Tyler first got the idea a few years ago, when he saw four officers in a local store and asked if he could use his allowance to buy them a few doughnuts as a snack. They were so appreciative of the gesture, it gave him the idea for a mission: to thank every police officer in America.

Now, he uses every school break and nearly his entire summer vacation to fulfill that goal.

When TODAY Food reached Tyler and Sheena in June 2018, they were in Kentucky, heading to Missouri, and had been up since 4 a.m. making their deliveries. (Tyler's dad and teenage siblings typically stay home, though his brother and sister joined them on a six-week road trip last summer.)

He attends a charter school near the Florida-Alabama border, and the school strongly supports community service, Sheena told TODAY, so they will give him his school work to take on the road, if necessary. But Tyler tries not to miss classes when school is in session.

Now, most of the time, the doughnuts are donated (dough-nated?!), or the family buys them, often at a discount. (They can pick up upwards of 20 dozen at a time.)

As for what motivated Tyler originally, he says that it was the four officers' extreme gratitude when he first offered to treat them. At the time, Tyler's mom explained to him that "unfortunately, a lot of people judge a whole by a few and because of that, some people were not very kind to officers" and that "no group is 100-percent perfect."

In 2019, Tyler told TODAY that he started doing this because "police officers protect us and keep us safe. I wanted to thank them for what they do and risking their lives."

Wearing a colorful cape, Tyler shows up to the precincts with boxes of doughnuts under each arm. They also usually bring coffee and he's started writing little notes to the officers, too.

His mom calls ahead to ask for permission. "They always say yes," she added.

Then, the "Donut Boy" will look at a map, pick out an area he hasn't been to yet, and it's on to the next place.

Aside from seeing the country, Tyler has learned a lot about law enforcement — from how to properly operate a taser to trying out a virtual-reality police car. He's already decided on a future career, and told TODAY that he hopes become a K-9 officer himself.

And, so far, he's enjoyed all of the great states he's set foot in.

For now, the family has no plans to stop deliveries. In addition to his own family's support, Tyler's trips are also funded by donations from friends, relatives and other supporters. (You can help him out, too, through his site: I Donut Need a Reason to Thank a Cop.)

This story was originally published June 7, 2018 and has been updated with new information.