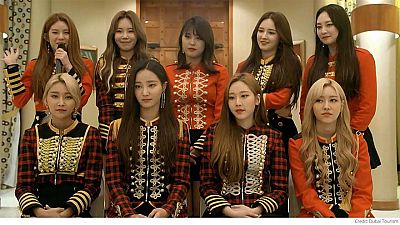 On Euronews’ ‘Cult’ this week, we look at the rise of the K-pop phenomenon in the Middle East. South Korean all-girl group Momoland are making their first visit to the United Arab Emirates. The 9-member band was formed through a 2016 reality show called 'Finding Momoland'.

Dubai’s architecture made a big impression on member Daisy as she told Euronews, “We've only seen Dubai like on TV or we would, like, read about it but it was a really fascinating experience here everything is so boogie and beautiful and the architecture especially”

Worth over 4.5 billion euros worldwide, K-pop is big business and Dubai is no exception where its fanbase is massively growing. Momoland is the first girl band to be certified platinum with over a hundred million streams of their 2018 single 'Bboom Bboom’.

Although K-pop generally refers to South Korean popular music, many pop fans consider it to be an all-encompassing genre exhibiting a broad range of musical and visual elements. Emirati blogger Fatima admires the colourful nature of the genre.

“K-pop is very unique and K-pop artists are not scared to show how creative they are; through their clothes, style, music, melody and I think that's why mainly they're so big”

Hundreds of excited fans were waiting to greet the girls as they landed in Dubai airport. The group were soon trending on Twitter. Momoland’s Nancy told how the girls are very appreciative of their fan base.

“They are such precious people there, they always greet us with a warm heart and they love our music as much as we love them.”

While boosting tourism with performances, the girls are also seen as positive role models for young Emirati girls. They are also bringing together different communities living in Dubai.

“We have a big Korean population here in the UAE. So having their art available here would make the [Korean community] feel like they’re at home. Also, this year the UAE is celebrating the year of tolerance” Humaid Alhammadi, President of UAE-Korea friendship Society

As K-pop continues to become a global phenomenon, it seems the girls' group visit to Dubai is sure to not be their last.