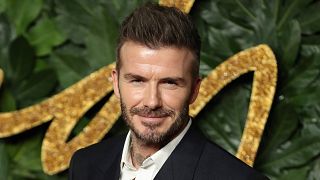 Former English international footballer David Beckham poses on the red carpet upon arrival to attend the British Fashion Awards 2018 in London on December 10, 2018. - The Fashion Awards are an annual celebration of creativity and innovation will shine a s   -   Copyright  DANIEL LEAL-OLIVAS AFP/Getty Images
By Drew Weisholtz  with TODAY Lifestyle  •  Updated: 08/01/2019

Beckham, 43, gazes wistfully into the distance while he wears a white blazer and crisp button-down shirt that exposes his neck tattoos, which look as though they've been highlighted green for the photo.

Love posted a photo of the cover on its Instagram page and people responded with cheers.

"I love love love the eye makeup," wrote another.

"His eyeshadow actually looks really good," chimed in someone else.

Perhaps Beckham's decision to not only wear eye makeup, but to wear green eye makeup, shouldn't be that much of a shock. Known for his tattoos, the clothing line he owns, the grooming line he launched, the scores of endorsements he has and the magazine covers he's already done, it's clear Beckham is a fearless fashion icon.

And that's not even taking into account his wife, Victoria Beckham, who also has her own designer fashion line. One can only wonder if she had a hand in her hubby wearing makeup.

People seem to be embracing the bold look, but Beckham has raised eyebrows before. Back in November, he incited a debate about whether it's OK for parents to kiss their kids on the lips after he posted a photo of himself kissing his 7-year-old daughter, Harper. That followed a similar incident in 2017.

However you feel about his makeup, one thing's for sure: Beckham is always a superstar.