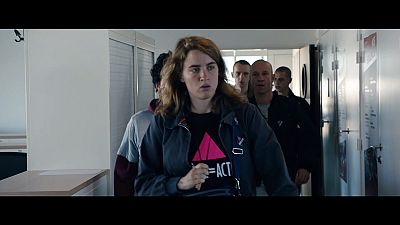 At the beginning of the 90s, with AIDS having already claimed countless lives for nearly ten years, Act up-Paris activists redouble their efforts to combat the general indifferencethey are faced with. Nathan, a new face in the group, has his world turned upside down by Sean, a radical militant, who gives what strength he has left to the struggle.

“Screened in competition at this year’s Cannes film festival, 120 Beats Per minute is a vibrant, passionate drama about the direct action group Act-up in France in the early Nineties.

“Director Robin Campillo draws on his own experience for this compelling story about love, life and friendship. We follow the campaigners as they debate on how to raise awareness and obtain treatment for HIV and AIDS, as they storm pharmaceutical companies that won’t release the drugs they need, and as they fall in love, fight illness and face death.

“Carried by faultless performances and a heady house music soundtrack, 120 Beats is a poignant and acute reminder of that generation’s battle against an indifferent society and their relentless celebration of life.”