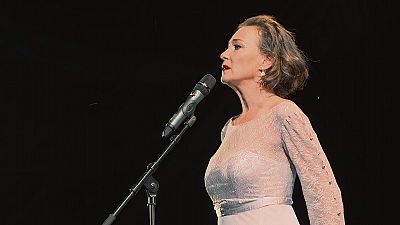 The classical thespian sings the songs and recounts the thoughts of Marlene Dietrich in the show ‘Boomerang Baby.’

Fullajtár relates to Dietrich’s political activism:” If you are a well known individual, your responsibility is greater, you cannot be silent in certain situations. If a minority is attacked for example.You have to stand against it. On the other hand I feel bad, as a citizen, if I remain silent. Something must be done.”

The show is inspired by Dietrich’s thoughts on life, love, politics, and based on the book of the movie star, called “Dietrich ABC”. A unique meeting of two great artists of different eras. The performance is a cocktail of difficult themes mixed with wry humour.

The show is touring Hungary this year and will then move abroad.