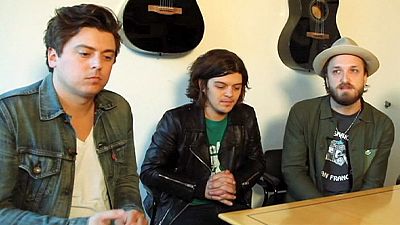 American band The Wild Feathers are back with their sophomore studio record, Lonely Is a Lifetime.

We're not really into the whole Americana, country kind of fad that's going on right now. We just want to be a rock and roll band.

Formed in Nashville in 2010 around the talents of Ricky Young, Taylor Burns, Joel King and Ben Dumas, three of whom sing in the band, the group officially hit the airwaves in the summer of 2013.

Released this March, the new album takes a slightly alternate path than their debut work.

Band member, guitar and lyrical lead, Taylor Burns: “I think there are lots of harmonies on this record, just as much as the first, I just think they are presented in a different way, so I think a lot of people will be thrown off at first, but if you listen, maybe it’s like a two or three listen kind of record, where it’s like then you’ll really get it. Those are the records I love, that end up being my favorite records. It’s not right on the money the first listen through.”

Guitarist and vocalist Ricky Young says they want to move away from getting lumped into the folk genre.

After numerous headline gigs, shows with Bob Dylan and Willie Nelson, and topping alternative radio, the foursome often find themselves hanging out together, even at home in Tennessee.

Ricky Young: “We actually really do love each and really like each other, which is bizarre. We always catch ourselves, like, ‘Why are we hanging out right now?’ Our wives are like, ‘Why are you hanging out with those guys?’…The cliche is … it’s a brotherhood, kinda like a platoon.”

Ricky Young: “It really is.”

Lonely Is a Lifetime has had positive reviews, with one American critic saying the album is more like “a band moving toward its own sound”.

Currently on tour in North America, The Wild Feathers will play Madrid on May 16.