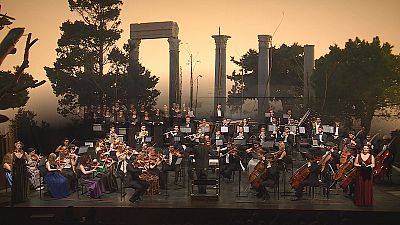 <p>Lebanon is a melting pot known for its rich and at times tragic history. But for the past 23 years, even as bombs fell and blood flowed, a classical music festival has played out on a hill overlooking Beirut. A sanctuary for music lovers like Myrna Bustani — the first woman ever elected to the Lebanese parliament, and the founder of the <a href="http://albustanfestival.com/">Al Bustan festival</a>.</p> <p>Bustani told Musica: “In 1991, when I came back from Europe and I visited Beirut I realised how dramatic the situation was for classical music: it was only used for funerals, when someone was murdered, or when a bomb exploded… I was so shocked I felt something had to be done. I told a few friends: ‘let’s set up a small winter festival’ They said: ‘Do you really think you’ll find artists ready to come to Lebanon?’ And I always said artists have more courage!”</p> <p>Hope has always been the festival’s leitmotiv, said its music director <a href="http://www.dnevnikulturni.info/audio/bioinglese.pdf">Gianluca Marcianò</a>.</p> <p>“The universal language of music, music itself, breaks every barrier. It speaks only through notes and emotions,” he said. “For the audience, a concert is a cathartic event where all life’s problems vanish, at least for a few moments; and that enables us to return to the roots of our humanity, with pure feelings.”</p> <h3>Eclectic programme</h3> <p>The festival’s <a href="http://albustanfestival.com/program/">theme this year</a> is “Music and Shakespeare,” marking four centuries since Europe’s most famous poet and playwright died. The programme is eclectic, ranging from classical operas, such as Verdi’s or Rossini’s “Otello”, to Japanese Nô theatre with a Shakespearian undertone.</p> <p>Mendelssohn’s “Midsummer Night’s Dream” was also a must. This piece of so-called ‘incidental music’ was composed in the 19th century for a production of Shakespeare’s play.</p> <p>“I find Mendelssohn has created a sophisticated orchestration, and he perfectly follows Shakespeare’s guidelines,” Marcianò said. “The music is like a piece of crochet, with so many details! There’s even the braying of the donkey, for example, evoked by the strings.”</p> <p>And viewers will have recognized one of Mendelssohn’s best-known pieces, the “Wedding March”.</p> <p>“From the very first chord you have this sense of happiness, peace and fulfilment… although it’s a march it has so many emotional, lyrical moments,” Marcianò said.</p> <p>The Al Bustan Festival, which started in mid February, runs until March 20, 2016.</p> <blockquote class="twitter-tweet" data-lang="en"><p lang="en" dir="ltr">8 Reasons To Attend The Al Bustan Festival This Year: <a href="https://t.co/GTOKyGOqlx">https://t.co/GTOKyGOqlx</a> <a href="https://t.co/LQZ7QmHwk9">pic.twitter.com/LQZ7QmHwk9</a></p>— Beirut.com (@BeirutCityGuide) <a href="https://twitter.com/BeirutCityGuide/status/702447938593644544">February 24, 2016</a></blockquote> <script async src="//platform.twitter.com/widgets.js" charset="utf-8"></script>