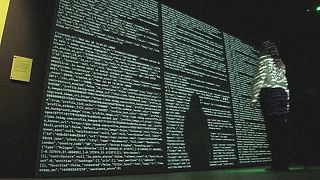 From emails to text messages and selfies and videos we post online, every day we generate unbelievably huge amounts of data.

We are undergoing a process that we can call the 'data-fication' of the world, which in many ways is similar to electrification of the world in the 19th Century

Big Data is the talk of the town and it now has its own exhibition in London, exploring how this new information is transforming our lives.

“The show really presents how we are undergoing a process that we can call the ‘data-fication’ of the world, which in many ways is similar to electrification of the world in the 19th century,” says Jose Luis de Vicente, curator of the ‘Big Bang Data’ exhibition at Somerset House.

“Tons of things in the city are producing data, from trains moving in the tube to sensors that can measure pollution, many things (…) can tell us things about how the city is behaving right now.”

The exhibition features a data stream blending real-time data from Twitter, Instagram and London’s transportation system to show the pulse of the city, and a striking montage made using some 600 selfies posted on Instagram in London in a single week. The photos have been analysed and, interestingly, showed that selfie-takers in London smile less than in other cities like Berlin or New York.

Another staple of the exhibit is ‘Black Shoals: Dark Matter Planetarium’, a real-time representation of global stock exchanges.

“It looks like a planetarium and every star in the sky is a stock that’s trading the world stock markets. And it’s connected to most of the biggest stock markets in the world in real-time, so when you lie underneath it and look up at the sky, you’re seeing most of the money in the world, all at once,” says artist Joshua Portway.