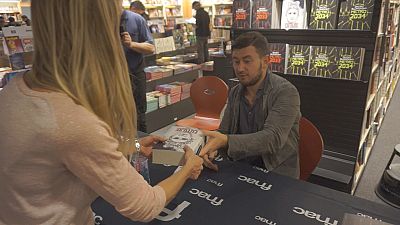 Russian writer and journalist Dmitri Glukhovsky is releasing his latest novel ‘Futu.re’ in France. Glukhovsky has made a name for himself with his best selling sci-fi novels, which explore modern social and political structures.

His latest book is set in Europe in the 25th century, where humanity has found a way to stop aging. To prevent overpopulation, a policy is introduced under which either mother or father has to give up immortality if a couple decides to have a child.

“This book explores themes like immortality and death. How do we define death? If the body is immortal, eternal, do we need a soul? Does the Church or God still have a meaning in a society inhabited by immortal beings? Will we need to create, will we be able to create if creation is our answer to death? Will we still evolve if there is no generation renewal?,” says the author.

Initially released online in 2002, it became an interactive experiment. The bestseller has since been made into a video game. Most recently, film rights were optioned by MGM Studios.

The writer says Russia enjoys a long-standing tradition with science fiction: “Back in the Soviet era, science fiction was the only way, the only “loudspeaker” through which it was possible to talk about society’s problems and the political system, and criticise them. So-called “real literature” was totally controlled by the state. My mission is to find readers and get them to join my humanistic community,” Glukhovsky tells euronews with a smile.

His Metro series has been translated into some 35 languages. ‘Futu.re’, Dimitri Glukhovsky’s sixth novel, is out now in French.