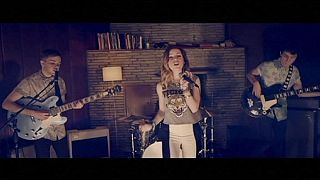 2015 has been a breakthrough year for Californian pop-rock band Echosmith, thanks to their track ‘Cool Kids’.

Peaking at number 13 on the Billboard Hot 100, the single – taken from their debut album ‘Talking Dreams’ – has also become a hit in Europe.

Siblings Jamie, Noah, Sydney and Graham, make up the band which was founded in Los Angeles in 2009.
Growing up in a musical household, the siblings play multiple instruments. They say their second single, ‘Come Together’, sums up the spirit of the band.

After releasing covers of popular songs over the past couple of years, the band now have a full album under their belt and seem to have found their own vibe.

Between concerts from the West to the East Coast, Echosmith will be touring Europe in May with stops in several major cities including Brussels, Madrid, Vienna and Milan.