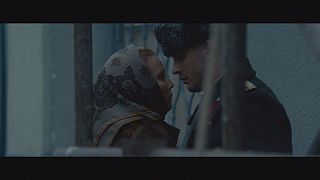 “Child 44”, based on a novel of the same name is causing quite a stir in Russia, where the story is set, and has reportedly been banned.

Producer Sir Ridley Scott has taken on British writer Tom Rob Smith’s tale of a World War II hero digging into a serial child killer case in a Soviet Russia that refuses to believe such evil is possible in a Communist paradise.

Members of the all-star cast expressed their disappointment at the London premiere, which was overshadowed by complaints of “distorting historical facts” made by the Russian Ministry of Culture.

“Yeah, well, you know, of course it shocked me a little bit and it’s sad because I want people to see the film. And, you know, for me it’s about characters. I step into it and try to give it life. I don’t really reflect too much on the fact if we’re telling the truth about the history or not. And it’s a piece of art,” said actress Noomi Rapace.

The author says his 2008 story, the first part of a trilogy, examines a well-documented true-life horror.

“When I wrote the book it didn’t strike me as a particularly controversial book. I thought it was a great story. The facts about that regime are well established. They’re published in many books. Many archive documents about the secret police. About the famines,” says Tom Rob Smith.

The real-life killings took place in the 1970s whereas “Child 44” is set in the Stalin period, an aspect the film’s critics may take issue with, but the struggle between good and evil is eternal, and neither can it ultimately be bound by the rules of man.