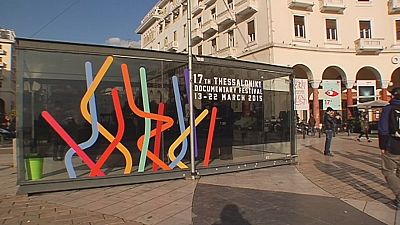 The art of documentary film making, in all its forms, has been celebrated in Thessaloniki, in Greece.

You work so many years with the film. You don't know how it works. When you just finish the film, you don't know if anyone will like it.

The 17th edition of the festival focused on films exploring a wide range of issues.

The International Federation of Film Critics awarded the prize for Best Greek and Best Foreign Documentary to one Greek and one foreign film.

Filippos Koutsaftis’ “Hail Arcadia” is both a trip to the past and present; a wandering through a place full of tales and legends.

“When I went to Arcadia, I didn’t know almost anything about the place. I had to find all these pieces, all these fragments, existing there from the mythological elements till the historical ages, from the prehistoric times till today. I had to combine all this information with details of today’s life.

«Every face has a name» by Swedish filmmaker Magnus Gertten won the Best Foreign Documentary award.

Those portrayed had never seen the film and Gertten found them to hear their stories of escape, survival and how their restarted their lives again.

Gertten said the prize was a great reward after such indepth work: “It is amazing that we get this award for the film. You work so many years with the film. You don’t know how it works. When you just finish the film, you don’t know if anyone will like it.”

Dimitri Eipides, festival director, believes this edition has been the best yet: “There were long queues in the ticket offices, all the venues were full, the reviews and the comments were very positive. I am excited particularly because documentary is at its best.”

He was on hand to pick up a special tribute in recognition of his work which often denounces the so-called exploitation of Africa and the tragic consequences of this new colonialism.

“As a documentary filmmaker, you can find yourself in areas, in situations with groups of people, that otherwise you wouldn’t be. When you are at this furthest point of the world, with a small camera, you suddenly feel something, that you have never imagined beforehand,” said Sauper.

One of the films that received widespread praise was “Milad-My planet” by Menelaos Karamaghiolis.

It follows the plights of an Afghan family forced to flee to Greece to avoid being killed over a cross-tribal wedding. But on arrival they soon discovered it is no safe haven.

“Because of the Schengen II agreement, refugees arriving in Greece, find themselves in a different kind of prison. They are excluded, without being able to move on towards Europe, or go back to their country. They’re political refugees and they left for very important reasons. Their lives were in danger there,” said Karamaghiolis.

“It’s a big celebration for the film making industry and the city has embraced it. More than 55.000 people came this year to see 168 films from 45 different countries. It makes the Greek festival the 3rd most important of its kind in Europe,” said Mitropoulos.