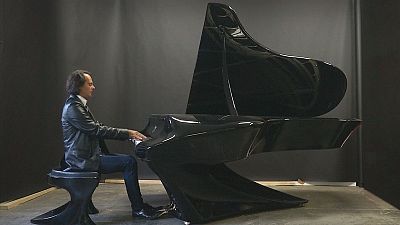 Doing away with many conventional elements, the 41-year-old hopes his new instrument will offer a more powerful and balanced sound.

“Typically the sound generated by a piano will resonate in different directions. But with mine, the sound is better directed. The inner leg works as a deflector, strengthening and directing the sound towards the audience,” said Bogányi.

Nearly all of the piano’s 18,000 components were revised. As well as new wider legs, its strings are suspended so they apply minimal pressure to the sound board, which is made of 20-plus carbon composite layers. The cast iron frame is all new.

“We’ve opened up the frame, as that part of a traditional piano is much more closed in. We opened it so that the sound would resonate more easily,” said piano maker Attila Bolega.

Four-time Grammy nominated American jazz pianist Gerald Clayton was impressed by the clarity of the sound.

“It was almost shockingly clear, whereas sometimes you play the piano and you feel like the sound just goes outward and you sort of have to catch it, here it really sort of stayed right there, which is a new sensation.”

By using carbon instead of wood, the Bogányi piano is much less sensitive to variations in temperature and humidity – an advantage for open air concerts.

The piano is the result of a 10-year project part-funded by the Hungarian government to the tune of 1 million euros and is expected to be priced at around EUR 200,000.