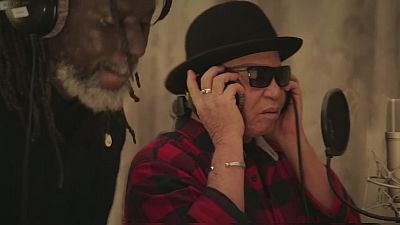 The song “Africa stop Ebola” is an African song with African lyrics. The recording is aimed at raising awareness of a disease which has swept areas of the continent, affected millions and left thousands dead.

Congolese diva Barbara Kanam believes that people should stop pointing the finger at Africa because of Ebola.

“Once again and foremost we should stop stigmatising Africa. We always hear the negative things which come out of Africa, Africa is poverty, but Africa is not only poor, it is not a continent where you only find Ebola. There are other things which happen here, there are artists capable of doing something together,” the singer said.

Salif Keita from Mali is one of the stars who took part in the recording which is seen as Africa’s alternative to Bob Geldof’s controversial recording of “Do they know it’s Christmas,” seen by some critics as patronising and ignoring the reality of Africa.

“Africa stop Ebola” is sung in French and local languages and the aim is to enlighten the risk of the disease to African people. It also offers advice on how to stop the spread of Ebola.

“We need the information to reach everywhere because I think that art and culture is the shortest route to communicate with these villagers so that they understand the importance of being able to avoid this scourge,” explained Guinea singer Mory Kante.

According to the song’s producers 3D Family, “Africa stop Ebola” has sold 250,000 copies since its unofficial release at the start of November with all proceeds going to the medical charity Médecins Sans Frontières.