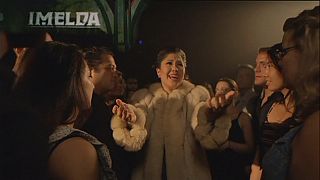 The life of the controversial former first lady of the Philippines, Imelda Marcos, is the subject of a new musical written and composed by former Talking Head, David Byrne and ex-Housemartin, DJ Fatboy Slim.

For David Byrne the concept offered some interesting challenges: “It was a little bit of a departure for me to write kind of stuff that was more poppy, but writing for the show and for the story, things that would take place in a dance club, perfect excuse to do that. So it’s like, OK, now you can do stuff that you had prohibited yourself from doing before, because you could say, no I can’t do that, it’s too corny or sentimental or whatever.”

The title ‘Here Lies Love” is Imelda’s own epitaph.

Why set the show in a night club?: “I remember reading that she had a mirror ball installed in her New York townhouse. Basically, she was not only going to clubs, she turned part of her house into a club. So I thought, ‘She’s got the music pumping!’ That’s the background in a lot of her life. So I thought, that’s good. Maybe this is a story that could be told in a club like that,” said Byrne

“Here Lies Love” is currently playing at the Public Theater in New York. The show will begin a world tour in 2015.