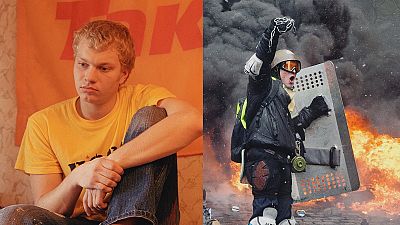 In November 2004, Ukrainians took to the streets to protest against electoral fraud. Nine years later, they rallied once again, this time to ask for integration into Europe.

The World Press Photo award winner has had his work exhibited at the ‘Visa pour l’Image’ and ‘FotoEspaña’ festivals (in 2004 and 2007 respectively), as well as at the Silverstein Gallery in New York (2008).

He spoke to euronews in Lyon, where his recent photographs of Ukraine will be shown at L'Atelier until January 16.

“Guillaume Herbaut, you witnessed the events taking place in Independence Square in Kyiv in both 2004 and 2013. How have protests in Ukraine changed?”

“For me, the 2004-2005 Orange Revolution was a mass of people… I was staying at the Ukraine Hotel, with a view over Independence Square. All day and all night I could hear the crowd chanting “Yushschenko!, Yushschenko!”, the name of the soon-to-be president.

“The protests in 2013 were different. People were disappointed with the politicians, so what we saw at Independence Square was individuals who were there to fight for an idea.

“The 2013 protest was full of characters. I came across a young man whose jacket reminded me of American soldiers’ jackets. The ones they were wearing during the Normandy landings. The young man’s face was disfigured, like the soldiers of 1914. He also reminded me of Hemingway during the Spanish Civil War. And so I said to myself, this young man represents many of the 20th-century’s crises.”

“Could you tell us about photos of yours which show the ‘before’ and ‘after’ of an event which made a big impression on you?”

“I took a photo on January 22, 2014. It was the first time Ukraine’s riot police, the Berkut, took out firearms and started shooting into the crowd.

“On the frontline, the protesters appeared mainly to be students. We can see it in the picture. They are not offenders. They are just defending their ideas – they just bought their baseball bats at a nearby shop. And you just wonder how they will manage to face the Berkut with such flimsy bats.

“Then amid the burnt-out buses I spotted a chic lady with her handbag. Independence Square was a world on its own and around it life continued almost as normal.”

“I covered 2013 with 2004 in my head. I carried out my work enthusiastically in 2004. The events of 2013 and ’14 were obviously visually richer, but in the field I wasn’t saying to myself ‘Oh, brilliant, I’m taking good photos’, I was telling myself ‘This is awful, I hope it finishes well for the people.”