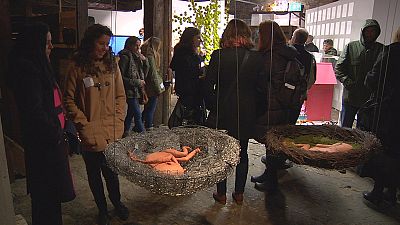 Young creative spirit is on show at 'Eksperimenta!' in Estonia.

Participants in the contemporary art triennial come from all over the world to exhibit their work in Tallin’s oldest church – Saint Catherine’s – and Hopner House, a medieval merchant’s house on the Town Square.

‘Eksperimenta!’ was created in 2011 with the aim of promoting art in education. As a result the artists showing their work are all aged between 14 and 19 years old.

‘Art and Science’ is the theme of the 2014 edition. Its curators have praised the participants for the level of artistry and creativity their work portrays.

Most striking, perhaps, is the serious – and at times very personal – approach taken towards various contemporary issues as Annely Köster, the show’s founder and director, explained:

“I think, in the 21st century, it is important to cross the threshold of inhibition where art and science are concerned”, she told euronews correspondent Anja Bencze.

“Because, these are important skills for coping well in life and offer the capacities needed to get on… The ability to think critically and analytically, and to regard as a creative challenge everything the world around us has to offer.”

The German, who is part of the International Munich Art Lab (IMAL), won an award in the ‘Inspiring Artist’ category.

“The people in Munich seem to be real snobby and mean. So I took photos of my friends in Munich and showed them to strangers. And they gave their first impressions of how to categorise those persons I photographed.”

Estonian Solveig Saar created one of the most commented-on works in the exhibition; a series of five paintings about school violence and bullying.

Her work sparked discussion and seems to be popular with school groups visiting the show.

As 18-year-old Saar explains, the series is based on personal experiences:
“It’s called ‘The Natural Choice’, because what happens in schools is quite like a natural choice. It was a few years ago – 7th to 9th grade – pretty much two years of constant bullying. But now everything is OK. But it is still something that leaves a permanent scar in your soul and in your life.”

Unlike in some other museums and galleries, many of the works on display at Eksperimenta! can be touched, creating an interactive experience for visitors, as well as the artists.