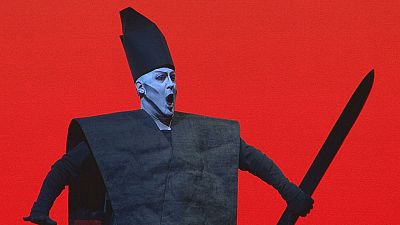 Ethereal, minimalist, zen – some of the many definitions of ‘Madama Butterfly’ in Bob Wilson’s version.

“Cio-Cio-San can be called a rebel because she denies her own religion; as a consequence she is rejected by her family, by her world. And yet, until the end, she finds the strength to go on, and have faith,” opined Vassileva.

On the podium, Italian Maestro Daniele Callegari is totally enthusiastic for this unconventional production.

“All the movements made on stage by our singers are strictly linked to the music, they are not at random; choreography plays a very important dramatic role, and is linked to the music in a perfect way,” stressed Maestro Callegari

Revealing more about the role she plays, Svetla Vassileva said: “There are moments in this opera that move me deeply. Bob Wilson, the stage director, asked me to play ‘introvertly’, inward looking, and never to express emotions, which is very difficult for me as I am an emotional, outgoing person… but I enjoyed doing it because it was something new to me!”

“This opera is hugely rewarding, especially when you can conduct a great orchestra which follows you, your baton, perfectly, and knows how to ‘breath’ with you. An orchestra is also great when it understands exactly what you’re asking … in this way, every single nuance hangs on to that extraordinary, invisible thread linking the baton to the stage,” said Maestro Callegari of his feelings for the show.

“Puccini has put a lot of ‘Italian soul’ in this opera, and this makes the protagonist a sensitive, passionate woman… Having said that, her suicide at the end is an act which is definitely linked to Japanese culture,” concluded Vassileva.