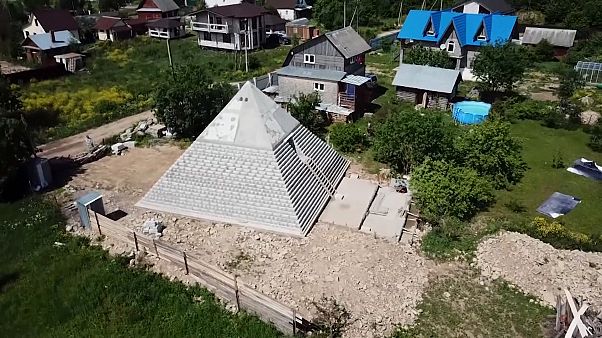 It's 19 times smaller than the original and made from concrete blocks rather than the basalt used in Giza.

But it's still an impressive size - it towers nine metres above ground and it descends to the same depth beneath the earth.

Each side is 13 metres long and the structure weighs around 400 tons.

For the husband and wife team who created it, attention to detail was crucial.

"I was really striving to achieve exact sizes, up to one-centimetre accuracy, on the right level, not with one or two-centimetre error, but the exact size, perfect and nothing less," says Andrey Vakhrushev, the pyramid owner.

"Of course, the blocks we used are different, but this is still a monolithic structure, we made careful calculations in terms of masonry, making it in a special way so that it is as close (to the original) as possible."

The Great Pyramid of Giza is the largest of Egypt's famous pyramids and was constructed around 2550 BC.

The couple spent two years studying the design before researching materials and made many return trips to Egypt before they began construction in June 2019.

They have even built a sarcophagus the same size as the original.

But instead of carving it from a single piece of stone, it's made of wood and filled with quartz sand.

Building a concrete Egyptian pyramid in your backyard could be seen as a little eccentric.

But Viktoria and Andrey's neighbours are proud of the unusual landmark.

"(They are) normal neighbours, friendly, and what they are doing inspires (me to think of) something different," says neighbour Aleksandr Pustoshinskiy.

At the moment, interior works are still in progress.

The family also plans to build a temple that will be connected to the pyramid by a passage.

The pyramid is in a village called Istinka, 12 kilometres outside St Petersburg, Russia.