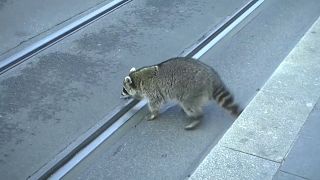 Raccoon shot dead in Germany after being spotted in 'drunken' state

A racoon became a social media star in Germany after it was spotted near a Christmas market in what witnesses described as a "drunken" state.

The animal wandered slowly across tram tracks in the central city of Erfurt on Saturday, seemingly paying little heed to onlookers taking photographs, before settling down to sleep in a doorway.

A security guard watched over the racoon until it was taken away in a cage by the fire brigade.

One eyewitness told reporters the animal appeared "either poisoned or inebriated".

"A breath alcohol test was not done with the animal" a police spokesman joked.

Local media at first reported that the racoon was being taken to Erfurt's animal shelter. But after the shelter posted on its Facebook page that this wasn't the case, a city spokesman told local broadcaster MDR Thuringia that authorities had no choice but to shoot the racoon because it would have been illegal to set it free.

He added that a vet had identified signs of canine distemper, a disease affecting a variety of animals which can be fatal.

The animals should not be released because they endanger the native ecosystem.

Under German law, racoons are categorised an invasive pet which may be hunted.

According to the Animal Protection Agency, it is unclear how shelters or rescue centres should handle captured animals.