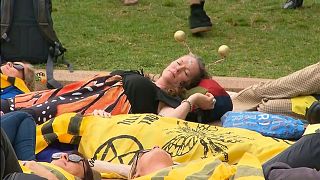 Over 100 protesters dressed as bees at Sydney's Hyde Park to highlight the claim that insects are under threat due to the human impact on the environment.

Some activists camped at Melbourne's Carlton Gardens overnight before marching to a street corner locked down by over 100 protesters.

The activists are running a "Spring Rebellion" series of demonstrations to pressure the Australian government into declaring a climate emergency.