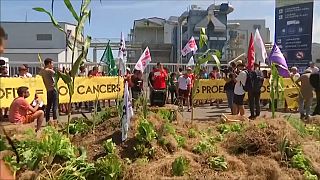 Activists protest outside French Monsanto factory ahead of G7

French activists brought in dirt, hay and plants to create a makeshift vegetable patch as they protested in front of a Monsanto factory on the eve of the Biarritz G7 summit.

They unfurled banners in front of a facility operated by Bayer-owned Monsanto, the maker of the controversial weedkiller glyphosate.

The factory based in Peyrehorade, near Biarritz, in south-west France.

Several French mayors have banned glyphosate from their municipalities, prompting France's government to take legal action to impose national legislation that would allow for its continued use.

Bayer says regulators and extensive research have found glyphosate to be safe.

Some 50 kilometres from the factory the city of Biarritz prepared to host world leaders, including US President Donald Trump, for a meeting of G7 nations.