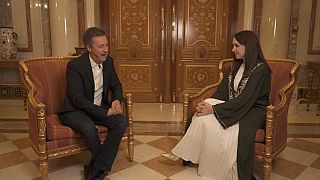 The World Travel and Tourism Council has concluded in Saudi Arabia, with speakers from the CEO of Hilton Hotels & Resorts to former UN Secretary-General Ban Ki-moon discussing issues from supply and demand to sustainability and the rising cost of travel.

American actor Edward Norton made a guest appearance. He spoke to Euronews exclusively about trying to make a positive environmental impact.

“The real challenge is to actually bring our whole economic framework into alignment with sustainability," he said.

"It's the challenge of our era.”

The chairman of the Tourism Task Force, MEP José Ramón Bauzà, told Euronews that the tourism sector in Europe risked being “left behind” if it didn’t develop a cohesive plan to tackle the spectre of recession.

“We had to have a very specific and detailed strategy in tourism," he said.

"And if we don't do that, it’s a threat we cannot afford by ourselves.”

"We have 27 different member states, each of us different, but we need to think as a whole. But for that you need, political need.”

For more information watch the video above