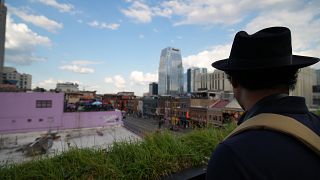 Nashville is known for its music scene and electrifying nightlife.   -   Copyright  Euronews
By Tim Gallagher  •  Updated: 31/10/2022

When you’re touring the American South on the Civil Rights Trail there’s one city that’s a must-visit and that is Nashville, Tennessee.

Whether you want to see moving historical landmarks, soak up some culture or enjoy the music, there is something for everyone.

Contemporary Nashville is known for its music scene and electrifying nightlife that sees thousands of visitors flocking to the city every year, but if you’re looking to broaden your mind and fill your soul ‘Music City’ has plenty to offer in that area too.

Here we’ve got a must-see guide of well-known landmarks and hidden gems for you to hit up on your Nashville trip.

The cultural wing on the Civil Rights Trail is not to be missed, and the National Museum of African American Music will tell you everything about the culture and influence of Black music all over the world.

Far from a stuffy museum, this engaging Nashville institution showcases everything from the history of RnB to an introduction to Gospel and shines a light on the little-known role of Black music executives in the industry. If you want to learn about Black music in the city that produced Little Richard, and Robert Knight this museum is a must-see.

After this, you can take a trip to Rep. John Lewis Way to visit the Country Music Hall of Fame and Museum which includes Charley Pride, DeFord Bailey and of course Ray Charles. A must-do at the Hall of Fame is to visit Hatch Show Print where you can marvel at their collection of music posters dating back to the 1800s and see professionals crafting them by hand.

Walk the grounds of the University that helped make history

In the 20th century, there was no shortage of spotlight moments when the eyes of the world turned to Nashville, and Fisk University sits at the core of the city’s role in history.

Diane Nash, a prominent leader in the Nashville Student Movement, attended Fisk and the Student Nonviolent Coordinating Committee was also based there. These groups were integral to the Freedom Rides of 1961 when 10 students travelled from Nashville to Birmingham to challenge the segregation of public buses which had already been ruled unconstitutional by the US Supreme Court.

Fisk is also known for producing the Fisk Jubilee Singers who are credited with popularising Black spiritual music outside of African American communities. It is thought that it is these musicians that earned Nashville the name Music City after they performed for Queen Victoria in the 1800s.

You can walk the grounds of Fisk University, marvel at its impressive architecture and soak up some history on one of the guided history tours of the campus.

Nashville famously set the scene for the sit-ins in the American South that challenged segregated dining.

F.W Woolworth in Nashville, a so-called ‘five-and-dime’ shop where items were priced at five or ten cents, became famous after one of the first sit-ins occurred there when African American students peacefully protested segregation at the diner counters.

But the modern-day Woolworth building on Fifth Avenue has become a theatre this year with a new concept. The historic building was transformed into a venue with more than 750 seats by country music artist Chuck Wicks. It features timely shows and can also be rented for special events.

Off the beaten track you’ll find the Jefferson Street Sound Museum, a small grassroots organisation dedicated to honouring the nightlife of Nashville and the legendary African American cultural hub of Jefferson Street.

Jefferson Street Sound Museum is a creative, non-profit space which visitors can tour and bask in the history of soul music it imbibes. The museum highlights the golden age of Jefferson Street between 1935 - 1965 when the area was alive with the sounds and sights of Nashville’s African American community.

The street itself hosted stars including Ella Fitzgerald and Duke Ellington who both performed at the legendary Blue Room. The neighbourhood was also alive with nightclubs, dance halls and jazz. The music of Jefferson Street was influenced by the legendary radio station WLAC, and Jimi Hendrix even took up residence there before moving to New York.

Jefferson Street can teach you about all of this and more whilst providing valuable community projects with the money it raised from your visit.

Of course, you need to enjoy some live music!

After a long day of musical education, you may well want to sample some of the sounds of this Music City for yourself, and Nashville doesn’t disappoint when it comes to live venues.

Contemporary Nashville has produced some amazing Black musicians such as The New Respects, Yola and Devon Gilfillian. While in 2021 Nashvillian Mickey Guyton became the first Black female solo artist to be nominated for a Grammy in the country category.

The 5 Spot, Rudy’s Jazz Room, Bourbon Street Blues and Boogie Bar all offer up a variety of music from Nashville’s homegrown Black genres to help you unwind and enjoy yourself, get down there to sample some of Nashville’s modern-day delights.