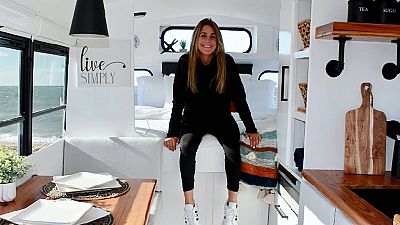 Welcome to Euronews Travel’s Women Beyond Borders, where we bring you women from across the world who are living brave, adventurous lives, and conquering personal challenges on the road.

While some are crossing the world in pursuit of the most unique experiences, or pursuing a lifestyle that many would dream of, others are breaking the mould of traditionally male-dominated industries. We hope the series inspires you to believe in the power of your own dreams.

For them, it started out as a simple way to spend some more time together - but soon grew to mean so much more than that.

“Then it sold very quickly and we said, ‘well, maybe we'll try one more.’ That was 12 buses ago.”

Why turn a bus into a tiny home?

The Donahues were a normal family of four living in North Carolina.

But in 2015, they suffered a dreadful tragedy. Their youngest child Michael was killed in a traffic accident, aged just 15.

“If he could live in a bus, it would be his perfect situation,” adds his sister, Megan.

Everyone processes grief in different ways. For Megan, she wanted to find a project to give herself a focus but also to honour Michael’s memory.

Remembering his favourite motto: “It’s the simple things in life that make it worth living,” Megan came up with the idea of making a ‘skoolie’. An old American school bus transformed into a tiny home on wheels.

The pair’s first bus was named Gus. Since then, every bus they’ve transformed has been given a name ending in -us.

Gus was a simple white bus with just a bed, sofa and table inside. Lisa says it was nothing special but, for them at the time, it was about seeing some progress.

They described it as therapy in their backyard.

Now with each new bus, there’s a unique theme and extensive planning to optimise both space and functionality.

“The difference between decorating a schoolie and a house would be that everything has to have more than one purpose,” explains Megan.

The average skoolie has 7m² of living space, whereas the average house has a couple of hundred. Both Megan and Lisa agree that a house is much easier to design.

The interior design process for the pair starts with choosing a cushion.

They admit that sometimes, they change the specific cushion half way through the process, but that’s usually how they start off creating their colour palette and theme.

Once ready all the buses come fully kitted out with bedding, towels, crockery - ready to hit the road for an adventure.

And as the number of tiny homes has grown, so too has the community.

Who lives in the tiny homes once they’re finished?

They’ve built a family-like team who help them create their skoolies.

So who gets to live in the tiny homes? For each bus, the Donahues make sure they find the perfect family to take it on an adventure.

Our main reason why we're doing this, too, is we want families to know how important it is that they spend time together - because you literally don't know if you have tomorrow

“Of course, it's a business, but at the end of the day, we feel that our buses are representing Michael - so it’s also who would he have chosen,” explains Lisa.

The duo regularly receive updates from their customers out on the road on adventures.

You can see the emotion in their eyes as they talk about the reaction they get from children when they first get to see their family’s bus or when they hear the places they’ll get to travel to.

“Our main reason why we're doing this, too, is we want families to know how important it is that they spend time together - because you literally don't know if you have tomorrow,” Lisa adds.

Although ‘Live Simply Buses’ started out as a family project to work through grief, it doesn’t look like it’s stopping anytime soon.

“These buses are such a gift. I can't imagine where I'd be without them personally,” says Megan.

“I'm just too happy right now doing this to stop it, so until I'm not happy anymore then it'll be my job.”

Watch the video above to see Lisa & Megan’s incredible skoolies.