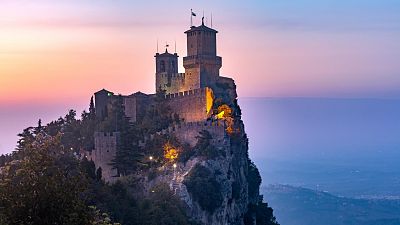 The world is full of remote places that you can’t reach by air. You wouldn’t want to holiday in all of them, of course, like Macquarie Island halfway between New Zealand and Antarctica, which is home to more penguins than humans.

What you might not know though, is there are five countries within mainland Europe that you can’t reach by air either.

So if visiting every country in Europe is on your bucket list, don’t forget about these five flight-free nation states.

Here’s the lowdown on how to travel to them.

Right in the heart of Rome, the Vatican City is the world’s smallest country. At just 44 hectares, it would be tough to squeeze an airport into this religious mecca. But from Roma Termini, Rome’s largest train station, you can reach the microstate in just 35 minutes.

If you’re travelling from Spain, you can get to Rome by ferry and a connecting train in just 24 hours or, if you’re driving, you can snake along the French Riviera and reach Vatican City in just 13 hours.

When you get there, make sure to visit St Peter’s Basilica, a stunning domed building from the Renaissance period, which just happens to be the world’s largest church.

4. Monaco: Playground of the rich and famous

Just along the coast from Nice in the South of France, lies the Principality of Monaco, a sovereign city-state and the world’s second smallest country. The French Riviera nation is well-known for its glamorous casinos, fast cars and rich inhabitants, but due to its size it doesn’t have its own airport.

While many of its residents - including a large number of Formula One drivers - might be arriving in private jets, they have to fly into Nice Côte d'Azur Airport, which is just 30km down the coast.

If you’d rather get there in a greener way, then why not hop on a boat from Nice or Cannes and enjoy the glittering coastline before you step ashore.

3. Andorra: A tiny country in the heart of the Pyrenees

Tucked between France and Spain in the Pyrenees mountains, Andorra is a tiny, landlocked microstate that is celebrated for its ski resorts. There’s plenty to do in summer too - in fact 90 per cent of Andorra is green space . From mountain lakes to horseback trails, it even boasts the world’s longest alpine toboggan run.

From mountain lakes to horseback trails, it even boasts the world’s longest alpine toboggan run.

While the country - the sixth smallest state in Europe - doesn’t have its own airport, it’s easy to get to from France and Spain. From Paris, you can reach Andorra in a little over eight hours by train, or drive in eight and a half.

From Barcelona, there’s a direct bus which will get you there in a little over three hours.

2. Liechtenstein: A peaceful place to escape it all

Europe’s fourth smallest country isGerman-speaking Liechtenstein, which sits between Austria and Switzerland in the Alps. The minute state is one of the least-visited countries in Europe, making it the perfect place for a peaceful getaway among the mountains.

With no airport of its own, your best bet is to get to the landlocked country by train. From Berlin you can get there in a little over ten hours, while from Vienna it’ll take you just seven and you won’t even need to change trains.

make sure to enjoy some ‘ribel’, the national dish of Liechtenstein, which is made out of cornmeal or semolina.

While you’re visiting, make sure to enjoy some ‘ribel’, the national dish of Liechtenstein, which is made out of cornmeal or semolina.

1. San Marino: The microstate on the slope of a mountain

Perched in the north-east of Italy, San Marino is the fifth smallest country in the world and one of the world’s oldest republics. Sat on the slope of Mount Titano, the microstate is just 13km in length at its longest point and the historic centre is a designated UNESCO World Heritage Site.

With no airport to its name, visitors can travel by train from Rome which will take a little over five hours, or hop on a boat from Pula in Croatia and travel by train/bus to reach the microstate in a little over eight hours. Whichever way, you’re bound to enjoy some stunning scenery.

Once there, make sure to visit the three fortresses that guard the mountain, with the oldest, Rocca Guaita, built in the 11th century.