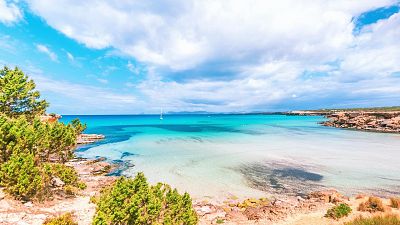 If getting away from it all is top of your list of things to do in 2022, you could do a lot worse than visiting Formentera. The smallest inhabited island of Spain’s autonomous Balearic archipelago - sat between Africa and the Spanish mainland - the island is awash with turquoise seas and white sand beaches.

The first thing to note is its tiny size. At just 20 km in length - this means there is no airport.

“Formentera island can only be reached by boat, which means you have to fly to Ibiza, or Barcelona or Valencia for example and you can take a boat and arrive at Formentera directly,” explains Alejandra Ferrer, the Vice President of the Council of Formentera.

Don’t let this put you off though, as the ferry from Ibiza runs regularly all year round and only takes 30 minutes to reach La Savina, Formentera’s main port. Think of it as off the beaten track.

Once you arrive, you’ll never want to go home. Compared to its hard partying neighbour, Formentera enjoys a quieter way of life. There’s still plenty to see and do among the whitewashed buildings and elegant lighthouses though.

Whether you want a slow beach holiday or something more adventurous, it’s an ideal island, whatever the season.

Here are some of our favourite things to do on this Mediterranean jewel.

What are the travel restrictions for Formentera?

Travellers from the EU and the UK need to show that they are fully vaccinated to enter the Balearic Islands. Passengers will need a COVID-19 vaccination certificate and will also have to fill in a travel health form before entering the country.

The rules for high risk countries may vary, you can find more information here.

The island has an illustrious musical past, with artists including Pink Floyd and Bob Marley having visited in the 60s and 70s. It’s even rumoured that Bob Dylan lived in one of Formentera’s famous lighthouses for a few months.

The island has an illustrious musical past, with artists including Pink Floyd and Bob Marley having visited in the 60s and 70s.

All sorts of musicians have been drawn here ever since and Formentera Guitars, a guitar building workshop where you can make your own electric or bass instrument, is carrying on the legacy. The owner also runs an annual guitar festival in September, with two nights of performances and jam sessions.

If jazz is more your thing, Formentera Jazz Festival takes place once a year, usually in May or June. Expect intimate open air performances by the sea and international names on the programme.

Located between Ibiza and Formentera, Ses Salines d’Eivissa i Formentera Natural Park covers the south of Ibiza and the north of Formentera - and all that sea in between them.

It spans 2,838 hectares of land and 13,000 hectares of sea. On land you can find pine and juniper trees, lagoons and dunes and up to 210 species of birds, many of them stopping over during migration.

Look out for the colourful Pityusic lizards darting about in the driest areas of the island too.

75 per cent of the national park, a UNESCO World Heritage Site since 1999, is actually underwater, but that doesn’t make it any less integral to island life.

Oceanic Posidonia is a marine plant that forms meadows under the water. It is this plant, which filters sediment, that helps to keep the waters so clear around Formentera.

Oceanic Posidonia is a marine plant that forms meadows under the water. It is this plant, which filters sediment, that helps to keep the waters so clear around Formentera. This process is also a vital support for the rest of the submarine ecosystem, which includes over 400 marine plants and 1,000 marine animal species.

Many things are threatening these vital sea prairies, including the anchors of boats which sweep the sea bed, climate change and marine pollution.

To reduce pollution further, the island is also trying to cut down on traffic too.

“The Formentera eco project is a project about the restriction of vehicles on the island, so that you have to reserve your own vehicle place for the summer. We try to find the balance between the life of tourists and the normal life of residents,” says Ferrer.

The eco project runs between 24 June to 7 September and aims to keep car numbers down when tourism triples the population of the island.

Get physical in Formentera

The island is quickly becoming a health hotspot too. For the last three years it hosted Formentera Zen, a yoga festival featuring yoga, wellness and meditation experts.

There are plenty of yoga schools on the island too, with retreats happening throughout the year.

You can explore the island’s rich sea meadows and intricate rock formations by visiting one of Formentera’s diving centres too. Diving and snorkelling are available, whether you’re an absolute beginner or more experienced. Divers can even visit the Mediterranean’s largest shipwreck, the Done Pedro, a 140-metre cargo ship sitting on the seafloor.

There are four diving companies operating on the island, you can find out more here.