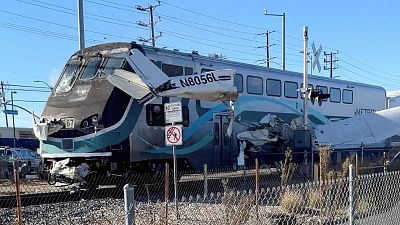 The moment the single-engine Cessna was struck by a high speed train outside Whiteman Airport in Los Angeles   -   Copyright  Reuters Connect
By Ben Anthony Horton  with Reuters Connect  •  Updated: 11/01/2022

Dramatic footage has emerged revealing the moment LAPD officers rescued an injured pilot from the fuselage of a downed private aircraft - just seconds before an oncoming high speed train barrels into the wreckage.

The incident, which took place on Sunday, involved a single-engine Cessna aircraft piloted by the man in his 70s.

After the plane lost power shortly after takeoff, the pilot crash-landed on a Metrolink high speed train line near Whiteman Airport, California.

And after already escaping death once that day, the man shortly had to do it all over again - this time with the help of local LAPD officers.

The video shows police dragging the man from the wreckage just moments before an approaching high speed train collides with the aircraft, sending debris flying towards bystanders.

"The plane had a failed takeoff and landed on the train tracks at a popular intersection," said Luis Jimenez, a 21-year-old music composer who was filming at the scene.

“Just seconds before impact, police officers saved the pilot, and a piece of debris almost hit me."

No one onboard the train was injured. The pilot is currently recovering from his injuries in hospital.

Watch the video above to see the dramatic rescue.